Film review by Jason Day of the comedy about a group of mothers who rebel against the strict but unwritten rules dictated by a group of ‘perfect’ moms. Starring Mila Kunis, Jada Pinkett-Smith and Christina Applegate.

Amy (Mila Kunis) is 32 and the mother of two children. She is married to a man (David Walton) who appreciates the food she makes more than her and works full-time managing sales for a trendy coffee company, despite the fact she is contracted to work only three days a week. Her colleagues are young and lazy and the rest of her day is a stress as she tries to meet the strict demands of the local Parent Teacher Association, led by the outwardly perfect Gwendolyn (Christina Applegate). One day, Amy snaps and kicks out her no good husband who is carrying on a webcam sex affair and tells her kids to start fending for herself. She pals up with two other depressed and overworked moms (Kathryn Hahn, Kristen Bell) to start partying and enjoying being a human again. But not without first facing the wrath of Gwendolyn.

If ever there were a film to make a child appreciate the unique pressures their beloved mother goes through (or has gone through) on a daily basis in order to run a ship-shape household, Bad Moms is not it.

That’s not to discredit the film as it’s still an entertaining and frequently laugh out hilarious 100 minutes. But when push comes to shove, the Mommy dearest’s in this film don’t go half as far as Joan Crawford would on a ‘normal’ day.

In this pastel coloured, ironed-and-starched, Clive Christian perfumed ‘never-neverland next door to Stepford’, there isn’t a whisper of floor scrubbing until your fingers bleed. Extreme nocturnal rose-bush pruning? Nah! Child-whacking sessions with wire coat hangers? On your bike!

No, the Bad Mom’s here are no full-on movie psychos, but instead cut loose for what looks like a brief long weekend to drive their husband’s cars fast down the wrong side of the road and get properly pissed once or twice. Hardly grrrrrl power.

It’s a shame the writer’s didn’t allow their characters to really let rip with some bigger misbehaviour, particularly when they give us an extended opening as Mila Kunis’ life comically implodes.

But this helps the audience identify that she needs to let off steam and at least they were smart enough to fill the script to the hilt with some eye-waveringly ripe one-liners, insults and penis talk. (Fellas in the audience, prepare for your bishop to get a good metaphorical bashing in this film).

Almost every joke hits the mark, probably because most are uttered by the fantastic Kathryn Hahn who is off the scale funny as the true wreck head of the bad moms. 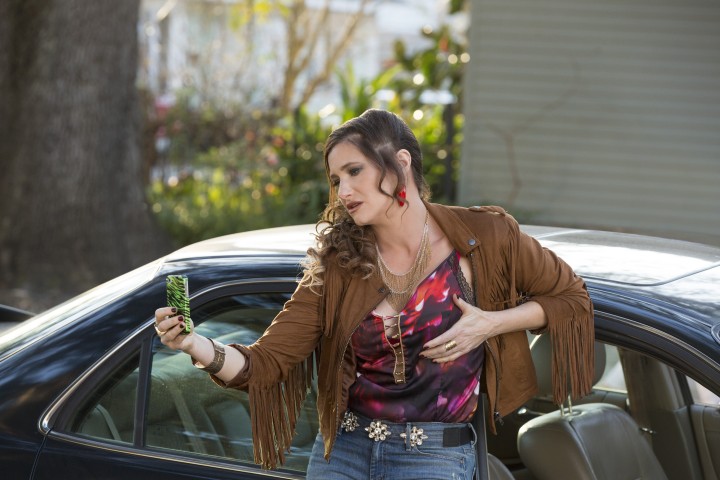 “Her tits are up!” Kathryn Hahn as the baddest of moms.

She benefits from a torrent of one liners which have no boundaries: as Kunis shows them a range of unfashionable items to hit the town in, she tells her “Are you looking to get laid or adopted”? Close to the bone, they fly thick and fast until your ribs are finally tickled into submission.

“I feel like I’m screwing up all the time” Kunis tells us “But I love being a Mom”. This sweet little line is a bit of a cop-out clause, but the girls’ talk generally makes up for their cautious walk.

At the end of the day, this isn’t really about bad moms, but is a fairly light and schmaltzy tale about kids standing on their own two feet and mothers being more realistic about what they can achieve in a day. Hence the sickly-sweet, neat and tidy conclusion.

Special mention must go to Oona Laurence who is stand-out brilliant as Kunis’ worry-wart, over-achieving 12 year old daughter who is already stressed about getting into College.

The solid performances are rounded off by Kristen Bell as the gauche, sheltered Kiki waiting to explode with life, Jada Pinkett-Smith and Christina Applegate as genuinely scary PTA Nazis and, in a tiny cameo, the omni-reliable Wanda Sykes as a relationship therapist who gets the best line of the film telling Kunis and Walton: “As a therapist, I can’t tell you what to do, but as a human being with two fucking eyeballs, you need to divorce…now!”