Dr Alex Harris (Fritz Weaver) has invented Proteus (voiced by Robert Vaughan), an artificial intelligence based super computer that will answer all of mankind problems and, eventually, do all of our thinking. But Proteus questions the the tasks he is given and the confines of his existence. After Harris laughs at his request to be freed, Proteus takes over his computer controlled house, imprisoning his therapist wife Susan (Julie Christie). Proteus subjects her to a series of appalling physical tests so he can judge her suitability to bear his child, that he hopes will grant him the immortality that humans so freely have.

Demon Seed must have been producing studio MGM’s trickiest film to promote.

Gone were the wholesome days of its rose-tinted past, when Andy Hardy adventures and Judy Garland musicals filtered out the harsh realities of life beyond the comfy confines of the cinema.

Indeed, it struggled to find an audience, possibly distanced by the computerised, sexual peccadilloes of the story.

The digital era was looming fast on the horizon and with concern about how the computer might substitute man in the workplace, Dean Koontz’s source novel tapped into these social fears. Koontz pitted lazy humans, in their effort-free, spotless household against the computers created to wait on them hand and foot.

He also thought much farther ahead, with manreplaced as the progenitor of the species – Proteus is the next evolutionary step. Natural selection? Darwin would be spluttering on his cigarette smoke. 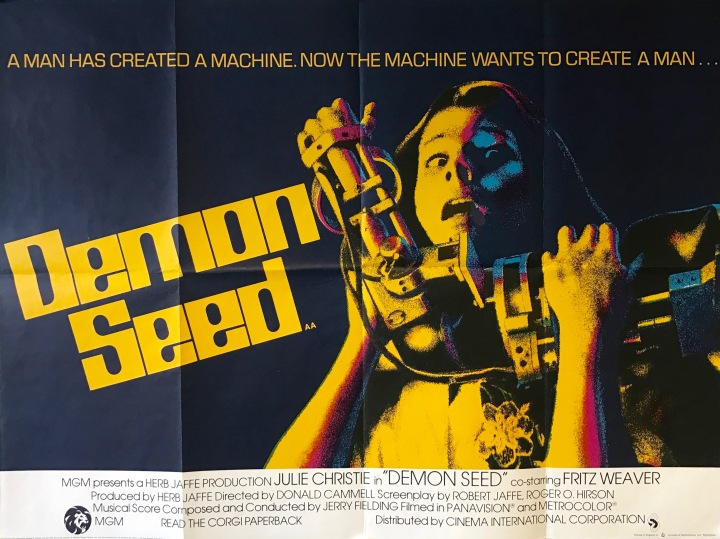 Poster child and all round Darling (1965) of the swinging sixties, Christie found herself adrift artistically during the less flippant, politically minded silver screen of the seventies.

Despite success with the rollicking Western McCabe and Mrs Miller (1971) and Joseph Losey’s gorgeous tragi-romance The Go-Between (1970) this new cinematic decade was not hers.

Demon Seed, based on the best-selling book by Dean Koontz, despite its salacious but cerebral subject matter, is a case in point.

She turns in a stirring and believable portrayal of an imperilled member of academia, engaging in a battle of wills and (mostly in passing) reasoned argument with her mental superior, a coldly calculating super-computer voiced by a reptilian, hissingly superb (and uncredited) Robert Vaughan.

Her credible lead performance however does not distract one’s attention from the flaws of logic in this movie, incredible given the attention paid in the script to her logic-based dialogue with the computer:

Director Cammell, whose Performance (1970) was notorious for the alleged sexual, drug-fuelled carrying-ons behind (and, allegedly, in front of) the camera, makes use of elliptical, distended shots to invoke the brain-altered delirium Susan is subjected to. During these scenes Proteus’ many tendrils and apparatus cut her clothing, open her legs and probe her nether regions, with more than just scientific curiosity.

Cammell also plays up the irony that, as Proteus determines to break free of the jail Alex has condemned him to slave in, he must imprison Susan by turning her home into a cell. Unlike Garland in the Wizard of Oz, there is no place worse than home.

Despite its interesting subject matter and excellent lead actress, Demon Seed doesn’t achieve status as a classic science fiction film, too camp to be truly credible. Like many good sci-fi concepts, it remains just that.