Film review by Jason Day of Only the Brave, a disaster drama about a team of ‘hot shots’  training for accreditation to fight forest and bush fires in the USA. Starring Josh Brolin, Miles Teller and Jennifer Connolly.

Based on the true story of the Granite Mountain team of ‘hot shots’ (teams of specialised fire fighters who deal with forest and bush fires), the film follows the training of Brendan (Miles Teller) who claws his way out of drug addiction by joining the hot shots before they face the mighty Yarnell Hill Fire, Arizona in 2013.

Forest fires have caught the public’s imagination over the past few years.

Although they have always been devastating to person and property, there have been several high profile conflagrations covered by international media that have had us gawping at the speed and ferocity of mother nature.

Also covered in the media, though with less attention, is the comparative lack of dialogue (or meaningful dialogue), or even screen time, for female characters compared to their male counterparts in Hollywood movies.

A study has even found that, if female characters are taken out of the plot, it makes no difference to the film.

Only the Brave hardly bucks the trend, but this is after all a dramatic account based on real-life people and incidents.

Here, the womenfolk are kept firmly at home while the big, brave, manly, manly menfolk trot out into the hinterlands to be heroes.

We are hardly two minutes in and, as Josh Brolin’s Hot Shot leader pours a morning coffee for himself, his wife (the always impressive Jennifer Connolly) is on her knees cleaning out the filter of the dishwasher.

A woman’s place is in the kitchen…fixing the dishwasher. Josh Brolin and Jennifer Connolly in Only the Brave (2017). Image: Columbia.

A small, inconsequential point, you think?

Later in the film Andie MacDowell (in an almost wordless cameo), who is married to former Hot Shot Jeff Bridges, tells her “It’s not easy sharing your man with a fire”. I’ll leave aside the yawn-inducing cliche of such disaster movie language, but it’s further indication of the wide gulf between the women and their men.

Only the Brave is, all told, a well made movie and it movingly and genuinely pays tribute to a group of men who have a lot more courage than most of us in dealing with a strikingly photographed hell on earth.

In Only the Brave we see men (real men that is, the type who go out into the wilds to put out fires without a thought to their own safety) putting up a stand against the increasing feminisation of the world around them.

In one key scene, the Granite Mountain Hot Shots perch atop a craggy mountain peak as trees in the valley opposite them crash and explode on the ground below, making them whoop with delight. 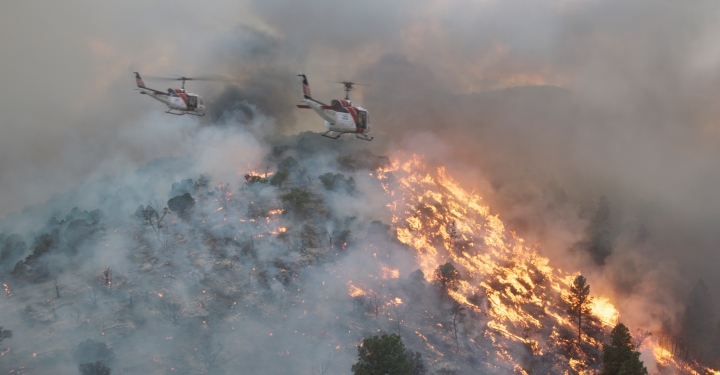 And the flames licked higher…dousing the fire in Only the Brave (2017). Image: Columbia.

This is not the first time they are seen in blissful, gendered isolation (their family lives, seen in blink and you’ll miss them moments, are duplicated – the male characters are usually leaving on a new rescue mission) but this is symbolically photographed. It’s as if this is the last outpost of pure, unadulterated machismo where females cannot (or dare not) intrude.

There is no homoerotic subtext in this film (even Teller and housemate Taylor Kitsch’s putative homo-esque family unit is ruined when Teller’s baby daughter falls ill with a fever), just a feeling that the neverending expanse of nature and those sections being consumed by fire are the only places males can retune or fell comfortable in their masculinity.

By giving stories like this such prominence in the cinema and by reducing female characters to worrisome neurotics, is the cinema propagating stereotypical representations of men and women? And mainstream cinema already lacks decent characters, of all types. Some may argue this is not the case as this is a true story about actual people who existed and thus is a representation of how the world is. I see the point, but we can at least mix it up a bit if we are going to spend millions of dollars on making the film and expect a broad spectrum of society to flock to see it in return.

The performances are, none the less, incredibly sensitive and deft. Brolin and the always watchable Teller are stellar leads, Brolin in particular delivers the stuff as the gruff, organised and completely reliable ‘super’.

Funnily enough, it is Connolly who puts in the best acting in the film. As Brolin’s wife, a former addict like him, she prickles his conscience throughout and delivers a splendid emotional punch in the gut when she corners him about his love of saving the land but not wanting to give her a child.

It’s a shame this isn’t explored any further but, as it is, Only the Brave is a diverting and gripping disaster epic.