Film review of the 1974 disaster drama about a skyscraper on fire, starring Steve McQueen and Paul Newman and directed by John Guillermin and Irwin Allen.

San Francisco is all abuzz as the world’s tallest building, the 135 storey ‘Glass Tower’ is officially opened, attended by the great and the good. But the night soon turns into disaster when an electrical fault leads to deadly fires breaking out all over the stricken skyscraper. The race is on to save the 300 guests trapped at the top of the building in the penthouse dining suite, as the fire rages toward them.

Amongst the ruins of the Airports and Earthquakes that were the staples of the highly popular seventies disaster drama, this film stood alone as the best one of its kind.

A decidedly simple update of the ‘Tower of Babel’ story of yore – the assembled crowd gaze in amazement to the top of this wondrous/monstrous edifice that seems to reach the heavens. Built by the hand of man as an awe-inspiring but otherwise pointless, deadly edifice (architect Neman and owner Holden) it doesn’t take an angry God to destroy it  (cost-cutting electrician Chamberlain, heroic fireman McQueen).

For the first time in Hollywood history, two major film studios (Warner and Fox) pooled their considerable resources (and consqeuently split the profit) to produce a single film as they both held the rights to similar books about burning high-rises. 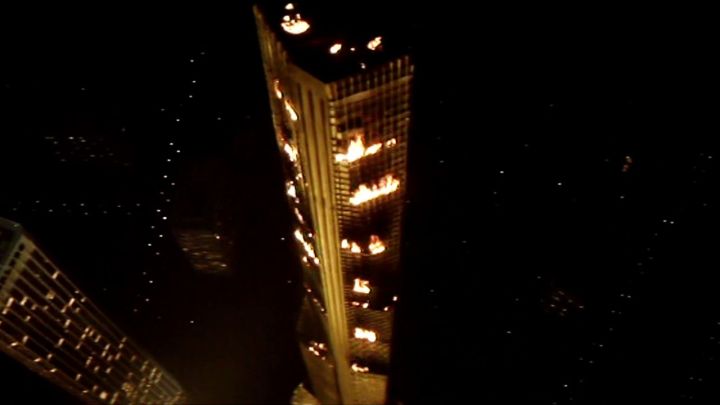 No surprise then that the so-called ‘Master of Disaster’ Allen is behind the camera, two years after producing The Poseidon Adventure. He must have been as giddy as a schoolboy in a sweet shop when handed the whopping budget, splashing out on the biggest box-office stars of the day (McQueen, Newman, Dunaway), major talent of the golden age of film-making (Holden, Astaire, Jones), huge sets and models to be burned/flooded in glorious fashion and the best special effects of the day. He also ran amok with the running time as this tips the scales at just under three hours.

Newman and McQueen battle squarely on screen, but the sparks were also struck off-set. Publicity chiefs had to jump through hoops to accommodate these mighty star egos on one sound stage. McQueen was the bigger star at the time (though only just) and demanded top billing, as his contract stipulated. Trouble was, so did Newman’s, so the concept of ‘staggered but equal’ billing was employed – McQueen slightly to the left, Newman slightly higher up and to the right. It was also pressed upon screenwriter Silliphant to pen an equal number of lines for both men.

Committed though both these stars are, the meatier performances are supplied by the old timers. Holden is as slick and oily as his hair, flashing a smile as he lies to his guests that “dinner will not be delayed”, despite having to evacuate his crumbling building. Oscar-nominated Astaire is sweetly delightful as a geriatric crook trying to swindle rich artist Jones (in her swansong).

There was an oscar nod for best picture and wins for best cinematography, song (“We May Never Love Like this Again”) and, unaccountably, editing (despite some glaring continutity errors – watch as the scenic elevator inches its way down and then back up the building). There were further nominations for composer Williams and the set designers. 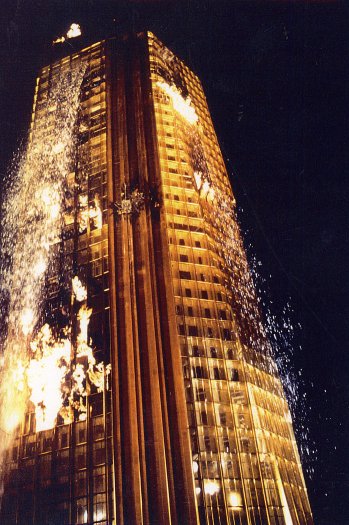 Bursting for it!…Including many millions of box office ‘kerching’ worldwide