Film review of the action film starring Bruce Willis about a group of European terrorists who take over a Los Angeles skyscraper during a Christmas party.

To like this review, comment on it or to follow this blog, scroll to the bottom of the page. Use the search function on the left of the screen to look up other reviews.

Visiting his estranged wife Holly (Bedelia) for Christmas in Los Angeles, New York cop John McClane (Willis) finds himself hauled into a high-rise nightmare when European terrorists headed by the smooth Hans Gruber (Rickman) take over the Nakatomi Plaza. He finds himself taking them on single-handedly, helped by a nice cop and hindered by a slimy journalist. 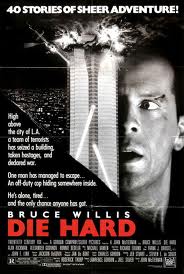 Easy to forget that this sweaty and unashamedly masculine action flick is very much a Christmas movie. In amongst the pyrotechnic special effects, salty dialogue (leading to hilariously overzealous dubbing by censors on TV. “Yippe Ki Yay, Melon Farmer/Mr Falcon/Kimosabe!” anyone?), gunfire and general skyscraper warfare, McTiernan’s film manages to work in all the traditional trimmings of families coming together, love, reconciliation, friendship, generosity and Alan Rickman as the kind of estranged Uncle no one wants to turn up on December 25th to exchange presents. Oh, it also snows as well (in L.A.? It must be a dream!).

Based on the novel ‘Nothing Lasts Forever’ by Roderick Thorp, if this was made today, by a lesser director, it could be classed as ‘Cave Man’ entertainment. Thankfully McTiernan (who had just made Schwarzenegger’s Predator and would later helm The Hunt For Red October) is a far surer hand not only with explosive set pieces, but also telling masculine character development. He makes much use, for instance, of the script’s inter-play between McClaine and Gruber, either over walkie-talkies or when they finally meet in person toward the end of the film. These moments are more than just dramatic diversions between one bang and the next, but push the film on and are on one level quite delicately, tellingly handled.

He’s also well served performance with with a brace of actors showing their mettle. Willis, in an early big screen role, was still white hot from TV’s Moonlighting but shows there is more to him than just a few chest hairs sprouting out of a white vest, a white vest that would become synonymous with the character he would play in three further Die Hard movies. It is at once endearingly sarcastic, sticking one finger up to authority, but still cowed into punishing his body and mind to save his family from the clutches of terror.

Rickman’s star making turn though is still the raison d’etre for the film dramatically. This is the direct counterpoint to Willis’ working-class hero. Gruber is a cultivated, verbose, almost irritatingly organised man who is given the run around by a someone who likes twinkies, Budweiser and Superbowl Sunday, probably all at the same time. He is none the less just as determined as McClain; the scene where they meet for the first time is to treasure. Gruber knows exactly who McClain is, but pretends to be a terrified stockbroker out of his depth. There is only the slightest of evidence that they detect who the other is, but they still regard each other with the deepest of suspicion.

They are complemented by a clutch of dazzling support performances, Bedelia as McClean’s headstrong and resourceful wife, Veljohnson as the indomitably loyal cop who reluctantly comes to his aid, Atherton as the down on his luck hack who sniffs the biggest scoop of the year by chance and Godunov, who is unforgettable as a vengeful terrorist who will not let McClean slip through his fingers.

Cameraman De Bont is responsible for capturing the pyromaniac beauty of the building being destroyed. He would later become a noted director himself, helming Speed and Twister.