Bar tender Bob (Hardy) keeps his head down and keeps the drinks flowing during shifts at his cousin Marv’s (Gandolfini) bar in Brooklyn. Marv’s is a ‘drop’ bar, namely an unofficial place where the proceeds of criminal activities by local gangs (ringleader: Aronov) can be safely dropped and stored during an evening, for collection when the bar has closed. But Marv has other plans for the small fortunes that he stores and is working behind the scenes with local low-lives such as Schoenaerts to rob the criminals, unbeknownst to the kindly and unquestioning Bob. Bob meanwhile develops a romantic attachment to the brittle and abused Nadia (Rapace) when he picks up a stray dog that has been left in her rubbish bin. A dog that was dumped by her violent ex Schoenaerts. 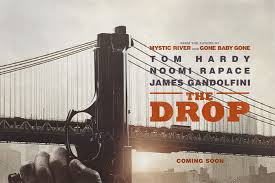 Here’s a neat little picture with some knockout star turns released unaccountably in the run up to Christmas and sandwiched between blockbusters such as Teenage Mutant Ninja Turtles, the last but one Hunger Games film and The Imitation Game. Although not a perfect film, it is well worth viewing for some satisfyingly dog-eared turns.

It’s always refreshing to come out of the cinema with hitherto unused neurones firing on all cylinders thanks to a new nugget of knowledge provided by a movie. The lesson I gleaned here is about the unique financial system that operates in these ‘drop’ bars, fascinatingly explained in a terse summary by Bob, our local hero and narrator. I’ve never been to Brooklyn, but now know to keep my eyebrows to the sky if any envelopes are suddenly slipped across a bar. See no evil, hear no evil and retain the use of one’s knee-caps.

Belgian director Roskam has dwelt on the seamier, masculine side of life before, with Schoenaerts in Bullhead (2011) about a cattle farmer making a dodgy deal with a beef trader. He therefore easily transplants this understanding of the difficult decisions facing the modern, working-class male to Brooklyn, as uninviting and unrelentingly patriarchal American setting one could choose.

He sets the scene perfectly when the film opens, the reflection of the city scape cast in a puddle, dipping us into the murk and grime of this underworld. From here on in, he is mostly in control of the desperate story that unfolds and also his stellar cast, but the heavy focus on the acquisition and training of the stray dog splits the film in two. These are two halves he is unable to merge properly. As an audience, we are left wrong-footed by the switch from gangland violence to doggy domesticity.

That Hardy was drawn to this script is not surprising. Based on the short story by screenwriter Lehane,

the film’s working title was that of the original material, Animal Rescue. Thankfully the producers went with a title change, but Hardy is an avid dog lover and has given interviews about his penchant for taking in dogs he meets during filmmaking (following this shoot, a mutt joined his ever expanding kennel).

The focus on canine capers allows some much needed respite from the unrelenting ‘Crooklyn’ neo-noir, even allowing one hilarious line to escape. ‘You fucking shot him!’ screams Rapace to which Hardy replies, ‘Absolutely. He was gonna hurt our dog’.

It’s funnier because of Hardy’s deadpan delivery, but highlights the problem I had with enjoying the film. The stronger side of the film is the crime half and director Roskam builds an admirable tension throughout as Gandolfini’s Machiavellian plotting boils slowly to the surface, using and dispatching those around him with garrulous abandon.

The dog is no red herring, but a catalyst for change in not only our lead character but the story itself, helping to shape actions and motivations, waking Bob out of the passive slumber of his existence and Nadia of her self-imposed fragility. But the scenes with the dog are an unbalancing addition to the dirty deals going around them. Do we really need to be told time and time again that the puppy Bob nurtures is ‘good looking’? Yes it is, but we are more interested in Bob manning-up and sorting out the messy web his boss is weaving around him.

Hardy’s Bob is masterfully quiet but pugilistic, jabbing you throughout the film with well timed punches to the gut. He is reserved, possibly a bit simple and in possession of a commendable poker face. You never quite know if Bob is terrified of the people he encounters, is difficult to scare, or if, being one bullet short of a full round, he isn’t entirely aware how scary the patrons of his bar really are.

It is the measure of a thoroughly well researched and professional actor that you are rewarded with a technically awesome performance. Note Bob’s cautious, shuffling walk, slightly out of step compared with the confident, bullying swagger of his peers. He stumbles over his words with Rapace but has word perfect recall and delivery when quizzed by the police or the crime boss who would paralyse with fear mere mortals. The accent too, always a sign of a quality turn, is flawless, his English tones completely eradicated.

Gandolfini of course, required no preparation or rehearsal to nail this type of characterisation in one punch. Great though Hardy is, the tell-tale joins in the Method process are still detectable: precision, control, self-awareness. Gandolfini, who won countless awards and plaudits as TV mob boss Tony Soprano, waltzes away with the acting honours with a superbly relaxed, vicious and witty petty criminal. This was Gandolfini’s last performance, following his death from a heart attack in 2013.

Rapace, with her mask-like face, could play ‘The Viennese Teardrop’ Luise Rainer in a biography. Her Nadia is a woman whose suffering and potential for a fulfilled and settled future are plainly visible to anyone who looks into her eyes.

And with the shifty, unpredictable Schoenaerts (another stunning male performance that eschews its native accent, Belgian in this case) as her ex on the prowl, this is hardly surprising. Schoenaerts injects a realistic sense of the sociopathic unknown in his all too brief scenes. I had no particular care for the bloody dog but even I knew, on first meeting this character, that the darkest, mankiest corner of a doggy abattoir would have provided it with a safer refuge.

The back room boys deserve full plaudits for helping to create this down at heel micro world. From the shabby decoration in the production design and props to the bare, chilling score that rumbles in the background creating a paranoid air as the set-up slowly unravels.

NB: one minor annoyance (and this proves more about what occupies my mind than anything else), but how antique is Bob’s wooing technique? Asking for Nadia’s number, even under the guise of her helping to look after the dog, is cute, but to write it down on a slip of paper? Hello, this is the 1990’s – we want our chat-up lines back! Use your mobile man!