Film review by Jason Day of the action-packed fairy-tale which is a prequel and sequel to Snow White and the Huntsman (2012) about two wicked Queens battling for control of a far-away land. Starring Chris Hemsworth, Jessica Chastain, Emily Blunt and Charlize Theron.

Set just before the events in Snow White and the Huntsman, the Huntsman (Hemsworth) as a child is abducted by the Ice Queen Freya, who has turned into a cold-hearted megalomaniac after her lover (Morgan) has killed their baby daughter in a fire. The Huntsman grows up to become a skilled warrior, part of Freya’s army of child soldiers who help her capture neighbouring kingdoms. He is thrown out however when he falls in love with Sara (Chastain). Years later, they meet up again when she is recruited to retrieve the magic mirror in which Freya’s sister the evil Ravenna (Theron) is trapped following her battle with Snow White.

Here’s a neat way to dissemble, rearrange, over-clutter and generally mess-up what should be a fairly

Rather like a joke not being funny if you have to explain it, a film with an overlong opening narration (from Neeson, whose gravelly Irish tones are seeming more and more like gruff movie intro cliche these days) which not only explain the purpose of the film but also tells us what is patently obvious from the images unfolding on screen, we are left with the immediate feeling: why has this picture has been made?

Taking an original story apart to breathe fresh life into it is all well and good, but putting it back together again needs to be done with some care. With this second Huntsman story the writers have become unstuck in spectacularly obvious fashion. In the first film, Ravenna as a child is kidnapped by a group of soldiers along with her brother. No mention is made of her having another sister (the brother is also dropped from their spoken family reminiscences in this second film).

Other characters are dropped, name-checked briefly (Snow White, has gone mad after staring into the trouble-causing mirror, mirror on the wall too much. A clear case of ‘vanity OD’), the general feeling being that the original story has been spread just that bit too thin this time around. 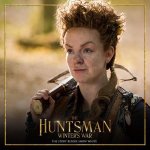 The story does pitch up with some more interesting characters this time around. Upping the feminist ante, we are introduced to a spiky female dwarf in the form of Smith, who proves herself to be tougher, stronger and wittier than her misogynist male counterparts (Brydon, Frost). Smith, as she so often proves to be on British TV and stage, is a twinkling light in support, with a glint in her eye for the Huntsman and a commendably foul mouth to boot.

There are other strong female roles. Chastain’s Sara is a muscular, flame-haired amazon type warrior who is more than capable of holding her own against her male peers. (The least said about her Scottish accent, which drew a few titters during the screening I attended, the better).

Blunt solidly portrays the frigid Queen with more subtlety than Theron does as all powerful and mistress of all she surveys but also as a manipulative child abuser prone to spouting political spin to achieve her world conquering aims.

Theron, in this film, has nothing more than a mere cameo of pantomime bravura and goes all out OTT to make up for it, completely wrecking the final reel in what amounts to an unnecessary nosing around the set.

But it’s not all bad in script land, as at least the central relationship between Hemsworth and Chastain has some very definite sex about it. They are written and come across like a couple who really do want to rip their clothes off and dive into a hot spring, a la Jon Snow and Igrit in Game Of Thrones (“You know nuffin, Mr Huntsman” etc).

There is a snappy and redeeming sense of humour and Blunt’s Freya has a definite touch of pained fury about her, which is carried throughout the story. Her frostiness even extends to the sound of her dresses rustling as she moves, replaced instead by the sound of icicles tinkling in the wind.

A nice and lavish production keeps this easy on the eye, but there is a lack of really new ideas to make this something which really fires up. There is a lot of action, in the sense that a lot of things happen (and even more to-ing and fro-ing from past to present), but not much actual incident.