Film review by Jason Day of the mockumentary comedy which follows David Brent, the horrible boss from BBC TV’s The Office, as he embarks on a new career as a rock star. Starring, written, directed and co-produced by Ricky Gervais.

David Brent (Gervais) was previously the star of an early, ground-breaking ‘fly on the wall’ BBC2 documentary about life in a paper merchant’s office in turn of the 21st century Britain. Times have changed since then, and he now works as a sales rep for Lavichem, selling toiletries and cleaning products. But his dreams of being a rock star have not diminished, so with his credit card in hand, he hires a backing group, stage manager and co-singer for a once in a lifetime rock and roll tour of a handful of Berkshire pubs and student unions.

You could be forgiven for thinking the monstrous David Brent had been consigned to the dust-bin of televisual history, considering the last series of The Office was made in 2003 and co-creator Ricky Gervais‘ subsequent and surprising reincarnation as Hollywood’s sarcastic awards ceremony MC without equal.

I’m not a fan of Gervais. I’ve always found off-putting that half-serious, half-jokey nastiness he peddles, as if he exaggerates and satirises the more odious aspects of his personality with his on-screen japes and simultaneously exonerating himself of being such a toxic person.

But, arm chair psychoanalysis aside, each to his own in terms of comic tastes and his considerable success stateside is certainly to be applauded. 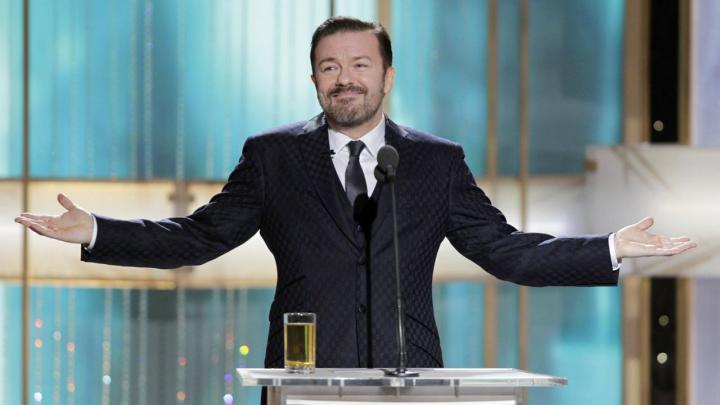 Smugness reaps its own awards – Ricky Gervais in action at the 2011 Golden Globes. (I won’t comment on the contents of the glass).

So it was with some reservation I approached this big-screen reimagining of his most famous creation, timed for release at a propitious moment as the BBC themselves prepare to launch a series of one-off reboots of their most famous sitcoms. So, no harm in Gervais harking back to former glories and also lining those stuffed, gold inlaid pockets.

These reservations that proved unfounded, for Life On the Road proves to be a bang-on continuation of the themes, humour, style, carefully constructed scripts and wince-inducing dialogue and pratfalls of its TV forbear.

‘Cringe-worthy’ is a phrase that could have been invented to describe The Office and Gervais’ own brand of humour. Prepare to cringe big time in this film folks as no target or minority group is left untouched.

Inappropriate office humour, casual sexism, racism and immigration, the disabled, students and the young, you name it and Gervais has artfully set-up a shooting gallery of issues to aim those nasty-jokey quips and songs at. Considering the amount of uncomfortable laughter the film generated amongst the audience and myself, he pretty much hits every target.

Brent is (or was) a modern day, middle-class Alf Garnett. But where Garnett ranted and raved  to a skeptical, questioning family in his living room, Brent’s monstrous self-belief and Olympic insensitivity toward others were never usually challenged within his office empire.

Not so in this film, where his colleagues pieces to camera are unrestrained in how much they disrespect or pity him.

Although it’s interesting to see how Gervais has opened the TV series up by taking his character out of the confines of those four walls, ironically his ‘tour’ is restricted to the county boundaries of where The Office was set. He escapes, but only for a few miles before being yanked back to the mundanity of everyday life. But at least this grandest of dreamers attempts a break for freedom.

He also gifts Brent, the most socially retarded of humans, with a happy ending he would never have received on TV. Gervais must be turning into an old softie, Hollywood tinsel rubbing off on this movie.

Burrows as the drummer here was the real-life drummer for band Razorlight up until 2009 co-wrote several of the songs for the film (along with Coldplay‘s Chris Martin), which might explain why for ‘bad’ tracks, they have a certain finesse to them.