On 20 April 2010, an explosion aboard the ultra-deep oil drilling rig Deepwater Horizon ignited an uncontrollable fire that killed 11 crewman. This film chronicles the events that led to this and the efforts by those in charge (Mark Wahlberg, Kurt Russell) to save the remaining crew and stop the disaster.

As years go, 2010 was probably not the greatest to be British. Not only did we lose 4-1 to Germany in a humiliating second-round World Cup defeat, but we shivered from the effects of the coldest winter in 30 years, the Icelandic volcanic ash cloud prevented most of us from travelling by air and supermodel Naomi Campbell was on trial for war crimes.

But worse came in April when the Deepwater Horizon oil rig, then leased to BP (the British-based multinational and one of the major oil companies in the world), conducted a number of tests on an exploratory oil well that resulted in a ‘blow-out’ of gas which consequently caused a fire, engulfing the rig and later sinking it. The ensuing oil spill from the open well caused massive ecological damage across North America’s southern sea board, all but destroying marine and bird life and decimating the tourism and fishing industries.

American news, quite rightly angered by the fudged and lacklustre response from BP who were clearly struggling to remedy the situation, focused on its British connections, referring to it by its full title of “British Petroleum” (a term which was otherwise not commonly used) and all but hung out to dry and then hanged then Chief Executive Tony Hayward, a Brit whose unemotional, downplaying statements were almost as disastrous for the company as the spill itself.

Director and former actor Peter Berg (who has a tiny speaking role here) and his writers avoid any such finger-pointing or jingoistic Brit-bashing. The script unexpectedly goes out of its way to explain American involvement and the complex way oil exploration and drilling is organised. The British bit of BP is only passingly referred to when executive John Malkovich’s American executive notes their responsibility to “the bosses in London”.

Berg likes to helm big-budget, sea-worthy action film (Battleship, 2006). But where that film was about as dopey as you get and failed to earn much on its whopping $220m budget, this production shows he has grown in confidence in handling mega-movies.

He and his screenwriters clearly know that the best disaster dramas focus on the cataclysm and rescue sequences rather than letting the personal stories get in the way too much. Kate Hudson, cast here as leading star Mark Wahlberg’s wife, might punctuate the events with Skype or telephone calls, but she is otherwise kept squarely in the background to let the action side of things take a breather, which ramp up when she is off screen. 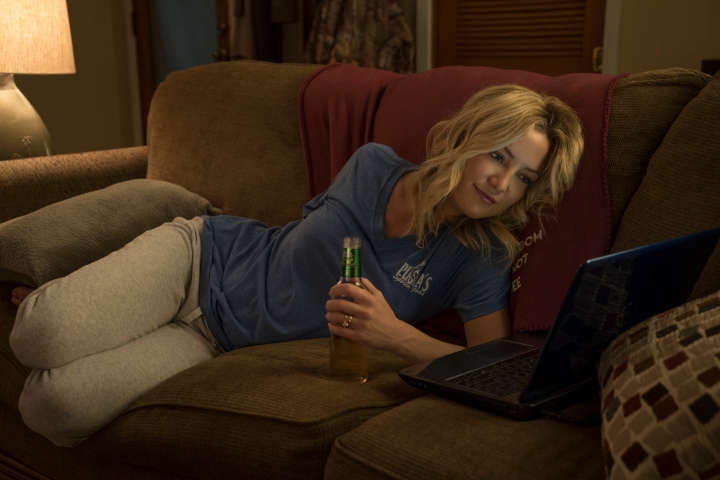 Part of engineer Mike Williams’ (Wahlberg’s character) testimony to the official inquiry is used before the opening credits roll and is cut before he answers why he didn’t hear certain safety alarms before the disaster.

An oddly blatant evasion, when right from the get-go we are faced with a series of obvious premonitions: a solitary bubble floats up from the cracked sea bed; an executive visiting the rig hurriedly removes a tie which is the same colour as its most serious alarm; a team who have not adequately secured the well leave early and the phone system is on the blink for the umpteenth time.

The style of the film is fast, busy and fact-packed – engineering and geological terms are flung at the audience as fast as the awesome pyrotechnical special effects and scenes of gory human injury (“His bone is caught on the metal!” cries Wahlberg about a rigger colleague, something only an Orthopaedic surgeon would be excited to heary), but Berg never lets the high temperature action and intensity flag.

There isn’t much for a cast to do in such instances, apart from perform as ‘disaster fodder’, dodging flames and projectile scenery, but the odd muscular turn is eked out. Wahlberg and Russell are on dependably good form and there is the glimmer of a strong female among the team (played by Gina Rodriguez) who holds her cool alongside the boys.

Malkovich, as a reptilian American executive, has the best role, calmly obfuscating and bullying the crew with a lyrical, seductive southern accent, despite his underarms being sodden with sweat.

The fallout from Deepwater, approaching an environmental importance making to the Chernobyl nuclear reactor in 1986, went further than the explosion and spill. Man, who has consistently raped Mother Earth to satiate his hunger for her natural resources, penetrated too deep into her this time. (Even as they buy petrol at the start of the film, Hudson notes they need to ‘buy gas…buy some more gas’, just like the other customers at the full forecourt).

Deepwater oil drilling continues, but environmental experts say the safety procedures implemented since 2010 are still not enough. The Natural Resources Defence Council has even said that not enough has been done to prevent another, or even worse, Deepwater from happening again.

Was Mother Earth’s swift, exacting vengeance on Deepwater enough? It seems only Father Time will tell.

One thought on “Deepwater Horizon (2016). A well-made disaster drama, read my review for what I liked about it.”