Recovering heroin addict James Bowen (Luke Treadaway) is given one last chance by his drug counsellor Val (Joanna Froggatt) when he overdoses and ends up in hospital. She finds him a flat to live in to sort his life out. Its dingy and on a council estate with drug dealers operating nearby and James finds things lonely, but one day a mysterious stray cat appears in his flat. Accompanying him on his busking in Covent Garden, Bob helps James become a huge hit with Londoners, eventually leading to a book deal about their experiences and life together.

I had the good fortune recently to see Ken Loach’s near hellish vision of lives lost in the miasma of a complex and uncaring benefits system in I, Daniel Blake (2016), learning to appreciate Loach’s gifts as a filmmaking talent along the way.

One aspect of poverty that film didn’t touch on (although it chronicled many others. Loach would have turned out a film as long as a De Mille epic if he added anything else) was drug abuse, something this latest slice of ‘life on the economic edge’ has at its core.

You could see this film as the more positive and ‘Christmassy’ look at being poor in the UK today (considering Christmas is just around the corner, its odd this wasn’t released in December).

But despite the overall themes of hope, belief and recovery, the writers and director are to be commended for still showing the sweating, convulsive lows that follow a high, although James Bowen’s cinematically simplified cold turkey is (perhaps necessarily) expedited in a brief montage.

James overdoses during the first reel in the first place he and his friend Baz can find – an unlocked car.

Baz follows James to his new home and James bravely refuses, knowing what this will lead to. He finds Baz dead that evening after overdosing on the street. 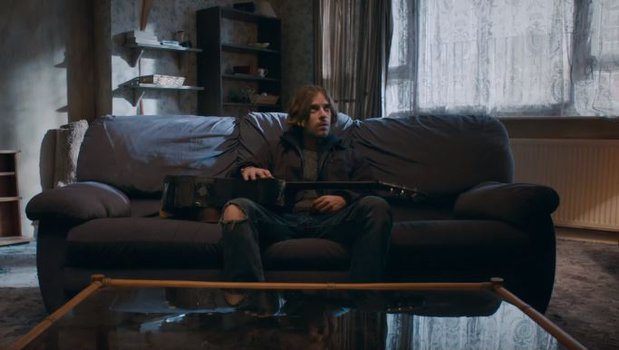 James (Luke Treadaway) settles in to his new flat in A Street Cat Named Bob (2016).

The council estate drug dealers stand on stentorian duty outside James’ window, forever tempting him and even seduce him with the promise of ‘paradise…white or brown’.

When Bob first appears in James’ fetid flat, he could be a hallucination, but the food he consumes tells us otherwise.

The real Bob the Cat plays himself receiving top billing and director Roger Spottiswoode and cameraman Peter Wunstorf ensure we see the story and characters from his view point of view throughout, reminding us this is his tale and not just James’.

Bob becomes James’ new and healthier, positive addiction when he feels ready to let heroin go. (NB: the real Bowen has a cameo at the end of the film, as a man buying the book this film is based on and praising it for telling things like it is).

Bob the cat as A Street Cat Named Bob (2016). Image courtesy of the official Bob the cat Facebook page.

Only one of the pale, super-slim, super-talented, intense and serious looking Treadaway brothers could look so immediately suited to playing a characters like this, and Treadaway does full justice to the itching, sweating shiftiness of this complex character (his twin, Harry, is also an actor).

James’ bohemian veterinary nurse love interest who is as much a catalyst for Bowen’s recovery as Bob, is sweetly, almost angelically, played by Treadaway’s real-life girlfriend Gedmintas and who is perhaps most famous for her turn as Henry VIII’s mistress Bessie Blount in The Tudors.

Froggatt completes the sometimes harsh feel to the film as Bowen’s no-nonsense drugs counsellor who risks her career to help him. Because sometimes, just sometimes, life can throw you a curve ball. Or, is that a hair ball?

See the videos and trailers on the official Facebook page.