Seemingly adrift following the apparent death of her daughter, linguist and communication expert Dr Louise Banks (Amy Adams) is recruited by Colonel Weber (Forest Whittaker) to join an international team working to decipher messages sent by aliens. Their enormous space craft have landed at 12 destinations around the world and the race is on to see if their intentions are hostile or friendly. Louise forms a bond with them, to the astonishment of her colleague Ian (Jeremy Renner), a bond that could help save the mission.

Sicario (2015) director Denis Villeneuve clearly enjoyed making this film, his first science fiction feature, based on Story Of Your Life by Ted Chiang as he is currently filming the hotly anticipated sci-fi sequel Bladerunner 2049. Due for release next year it stars Harrison Ford, who reprises his role from the Ridley Scott original.

Science fiction films fall into two broad (very broad if you will – I’m mindful of sci-fi fans thoughts on this!) categories. The big budget, noisy and (usually) scientifically illiterate blockbuster in which we puny humans seek out and (usually) destroy things. There is also the quieter, more contemplative effort in which we expand our horizons and seek to find things out.

This curious, probing, existential production definitely falls into the latter camp. There are no nasty aliens trying to kill us or take over the Earth, just a peaceful, inquisitive conversational quest.

Language construction and how we discern meaning from aural and written words are not the sexiest (or even most cinematic) of topics, but Arrival covers such relatively complicated matters in lucid but never patronising dialogue, performances and images. As Louise and Ian learn about the fascinating extraterrestrial language, we the audience are taken on an equally interesting knowledge journey ourselves.

The films themes of immigration (the aliens here are the ultimate illegals), political division and international communication have up to the minute relevancy, given events and speeches during the recent American Presidential election. “We need to talk to each other” Adams states when countries around the world suddenly switch off to deal with a supposed threat on their own; prophetic words, perhaps, that might well form a campaign slogan in four years time. 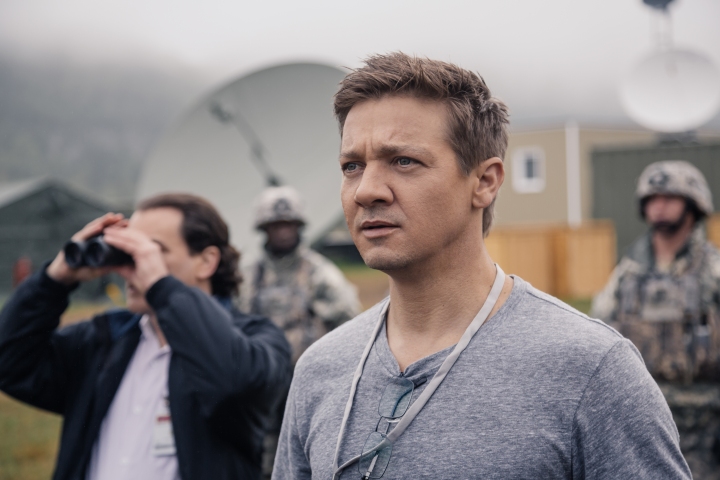 Jeremy Renner as Ian Donnelly in Arrival by Paramount Pictures.

Adams, who oscillates on screen between poker straight, steely reserve (American Hustle, 2013; The Master, 2014) and winsome, tremulous femininity (Catch Me If You Can, 2002; Enchanted, 2007) holds centre stage here with an assertive character that combines both. Even cocooned in a helmet and orange boiler suit, her angelic features and expressive, delicate performance keep you fixed on her.

Its cliche for American blockbusters for a female character’s development to rest on healing/discovery after her child has died, but Adams is a skilful actress and she avoids any mawkish, emotional cheapness here.

Having a child who develops a terminal illness is also script-writing shorthand, as this leads her to question life, existence and the human condition when faced with a higher power rocking up in a Montana field. The frequent, swooping shots from the ground up to the sky and vice versa, revealing little humans scampering around, also helps to establish this earth and what-in-heaven aspect of the story.

The largely male supporting cast turn out robust and thoroughly good performances (especially Whitaker) but this is essentially a one woman show.

Complementing the unnerving, cerebral story is some other worldly music, including moaning, hollow whale song and the design of the ‘Heptapods’ (although only just visible, through the mist of s separate part of the spacecraft) is unsettlingly scary but also curiously familiar, like huge versions of the bony hand ‘face huggers’ in another Ridley Scott sci-fi, Alien (1979).