Set during World War II, Desmond Doss (Andrew Garfield), a devoted Seventh Day Adventist, wants nothing more than to serve his country as a medic, despite being morally against using or even holding a gun. Despite resistance from the military and a court martial hearing, he fulfils this aim. During one mission, he stays behind when the Japanese forces advance on his squadron and single-handedly rescues more than 70 men.

I met Mel Gibson once.

No, not via the TV or the internet but in real life in the flesh.

It was about 2005 and I was waiting for the door to open for a job interview in Earl’s Court and he walked down the road toward me. It was unmistakably him, although I metaphorically pinched myself to make sure.

Expecting him to walk past and beyond me, I didn’t pay it anymore credence, but he stopped next door to my potential employer and rang the doorbell.

We stood staring at each other for a minute or two. Well I did, he smiled politely but with a look such that he wished the ground would open and swallow me whole.

My employer (for I got the job) opened the door and I went inside. It was the only time I have

Andrew Garfield on the precipice of Hacksaw Ridge (2016). Image courtesy of Lionsgate.

ever been truly star struck.

Now, back to the present day as a lot has happened to ‘Swell Mel’ in the intervening years.

The matinee idol turned Oscar winning director has been almost unemployable after a string of embarrassing outbursts in his private life (antisemitic comments, drink driving, importuning a female police officer, leaving threatening voicemails on his ex’s phone), may well be coming out of his Hollywood pariah phase.

Not that he has been entirely absent from the big screen. There have been the odd acting assignments but nothing hugely memorable and his production company Icon will have kept him busy. Hacksaw Ridge though, is his first directorial outing since the gripping if eventually palling, extended chase sequence that was Apocalypto (2006).

Andrew Garfield as Desmond Doss and Teresa Palmer as his wife Dorothy in Hacksaw Ridge. Image courtesy of Lionsgate.

Why the wait to get behind the camera again, then? Firstly, he wasn’t too prolific before, with only four feature length films in 13 years. As he was hardly rushing, he may have been waiting for the right story to come along (although he had previously turned this one down).

Second, perhaps Hollywood has been unwilling to back a director with such public emotional instability (there are an incredible 35 producers of various types listed on IMDb). Most of the film’s budget came from Australian backers and had tax reductions from the Australian government (hence the Australian supporting cast). Gibson, a native Aussie, may have found it easier to get a project off the ground on more supportive, home soil.

Thirdly, and perhaps unsurprisingly, Gibson might have wanted to keep it cool and low-key until the PR-heat had died down. 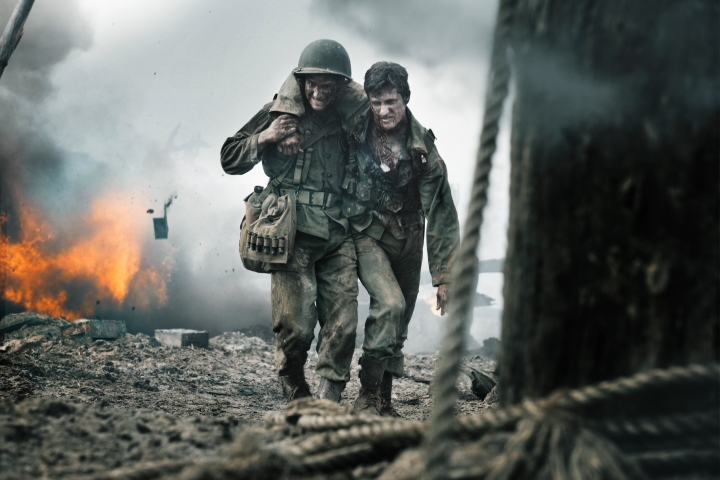 If anyone is in need of a PR blitz it’s Gibson but I, for one, am happy to half-extend an olive branch to him. Despite the uneven feel of his best films (Braveheart, with its gob-smacking historical inaccuracies and anti-English tone is still a brilliant film and Apocalypto, which manages to quicken the pulse rousingly for most of its too long duration), he is a talented man who has produced some great cinematic moments.

Gibson has a penchant for scenes of conflict, red in tooth and bayonet. The first shots are of dead bodies and soldiers on fire. As Garfield and his squadron, all wide-eyed with excitement after their training, reach Asia, van loads of injured soldiers and corpses, piled on top of each other, pass by.

When they finally reach the titular stronghold, bodies as far as the eye can see are strewn on the ground, along with heads and other body parts blown away from their owners. Maggoty remains tell us this battle has been going on for sometime.

Anyway, you get the picture. It’s no Disney tale; Gibson does like to ladle on the gore and misery.

Its tempting for a reviewer to see Gibson, long out in the Hollywood cold, envisioning the Doss character as an extension of himself, a man punished by the crowd before enjoying a beatific final moment as an ‘angel’, winched down to safety as steam clouds billow underneath him and the clean, pure heaven of the sky waits to welcome him above. Despite all of the carnage Gibson throws at us, he gives us just a little beauty.

There are references to his previous films. In the main poster (used in this review), Garfield’s character carries a man on his shoulders, resembling the extended cross-carrying of Jesus The Passion of the Christ.

Of the performances, all stand in line well. Garfield has the right mix of innocence and stubbornness to make Doss a man you admire and would you might also slap. Vince Vaughan has the best fun as a Sergeant with a fine catalogue in one-liners and nicknames to give this unrelenting piece a much needed, thin vein of humour.

Does Gibson’s off-screen behaviour eclipse the relative value of this production? Well, as war movies go, it has gumption and drive, but it lacks the grandeur or distinction of a great war film, a Patton or the empathy and emotion of a All Quiet on the Western Front.

The ubiqutious scenes of the men in their barracks getting to know each other and sizing each other up (quite literally, as we have an extended discussion about the endowment’s of ‘Hollywood’) are par the course add to the cliches (Doss has a girl waiting at home, his father is against war because he fought in the Great War).

We rush through these scenes and through the court martial brought about by Sam Worthington’s tough and uncompromising captain. Yet, in what amounts to the blink of an eye in screen time, he tells Doss “You did more than any man could”, despite earlier stating Doss represents everything he loathes.

But, despite these shortcoming, Gibson and his force largely concentrate on the nausea-inducing set pieces that make a gritty and gripping movie.