Film review by Jason Day of the drama Fences starring Denzel Washington as an African American working class man in the 1950’s. Co-starring Viola Davis in an Oscar winning role.

Set in 1950’s Pittsburgh, working class man Troy (Denzel Washington) muses with his best friend Bono (Stephen Henderson) about life, family, women and work. He believes himself to be a solid and respectable family man, who works long hours as a refuse collector to support his wife Rose (Viola Davis), son Cory (Jovan Adepo) and his older son from a previous relationship Lyons (Russell Hornsby). But his iron grip on those around him is being tested, not least by Cory’s growing independence and the news that he has fathered a child with his mistress.

Faye Dunaway and Warren beatty might have committed the major cock-up on the night of the 2017 Academy Awards, but the prize for most dejected loser goes to Denzel Washington when the statuette for Best Actor was awarded to Casey Affleck for his quiet but finely detailed performance in Manchester By the Sea.

Who knows what was actually going through his mind as Affleck politely (or cheekily) dedicated the Oscar to Washington, but you don’t need to be a body language expert to know it wasn’t sweet thoughts.

In one respect, you can see why Washington was disgruntled. His performance in Fences (also nominated in three other Oscar categories) is full of élan, charm and energy, a true ‘actorly’ turn. Affleck’s, in comparison, is an emotional no show, in which he appears to do very little from frame to frame.

But Affleck wins out in the end. As the pieces of this jigsaw puzzle come together, so does his acting until, at the end, the audience is rewarded for its patience with a performance and a film that slowly reveal their treasures.

In Fences , they are all there to see from the get go, including acting treasures that almost shout for your attention. Fences is a film that doesn’t just wear its heart on its sleeve, it rings every last drop of blood from it, smears itself from head to foot and then runs around the set screaming at the top of its voice.

Or at least, that’s Mr Washington’s performance. I found myself thinking that Denzel, in his later years, seems to be lapsing into the same sort of grandstanding behaviour as other respected film and stage actors at that time in their lives (cf. Charles Laughton, Laurence Olivier etc).

This is partly down to the role as written. Troy is a fine stage role and he is the charismatic, motor-mouthed centrepiece to some exceptional ensemble acting. But installing himself as director as well might have been a mistake on Washington’s part.

Note the measured, controlled, but richly evocative support performances around him; Washington sticks out like a sore thumb as an actor who needed reining in. Another director with the confidence to keep him in check might have helped him create something other than the ‘earthquake every 2 minutes’ performance he has given.

Thankfully, writer August Wilson (adapting his own play) gives the audience some downtime and Washington does leave the set; my ears at least were grateful.

Of course, this is probably the point for Troy is the sort of man who wears down anyone within earshot. This works electrifyingly on the stage when the power of the spoken word resonates with an audience, but his relentless jibber jabber on film with other performances pitched closely to each other unbalances the piece. On film you see, one can tone things down.

Surprisingly, only Davis as Troy’s emotionally neglected wife was also Oscar nominated, when Mykelti Williamson as Troy’s retarded brother and Henderson as his wise best friend Bono are also pitch-perfect and, again, provide those tonal differences to the male lead.

But Davis is off the Richter Scale in terms of impact – this is as about as near as you’ll get to deep, heart-wrenching ‘real’ acting, all teary-eyed and snotty nosed. 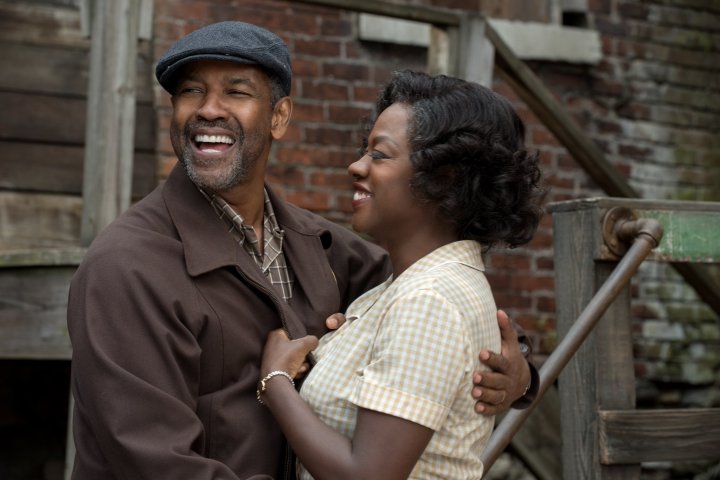 There’s no gobby showing off here, she just has an intuitive understanding of how a woman dedicates herself to one man only to be painfully let down by him. She opens a door into Rose’s soul and doesn’t need to rabble rouse the audience to do it.

The fences of the title are physical (Washington is erecting one as a barrier for his yard) and metaphorical (how we talk and act to keep people out or to let them in) and the visual motif of the baseball, symbolic of Washington’s failed past as a player, tied permanently to the tree in his yard, symbolic of him never breaking free is a telling one and works better on the big screen than on the stage. But the barrage of dialogue is also a fence, corralling the audience like a colt into a corner.

Wilson was too close to the source material to take a gamble and cut some of the words. The film is over-stuffed with dialogue but at least it is golden, salty dialogue of the sort Eugene O’Neill would have penned 70 years ago.