Film review by Jason Day of Beauty and the Beast, Disney’s live action remake of the animated hit from 1991, starring Emma Watson and Dan Stevens.

Belle (Emma Watson) is a pretty bookworm in rural, 18th century France. Patronised and shunned by her community, she lives with her father Maurice (Kevin Kline) and fends off the aggressive courting of the handsome but narcissistic soldier Gaston (Luke Evans). When her father is attacked by wolves, he seeks shelter in a hidden castle over which a spell has been caste, turning the servants into household items and the master into a huge, vicious beast (Dan Stevens) who imprisons the old man. Belle swaps places with Maurice and over time  appreciates the inner beauty within the beast. But Maurice’s account to the townsfolk sees a lynch mob formed, led by the enraged Gaston.

With the hugely successful live action remake of Cinderella (2015) safely despatched, Disney must have been sure they were on to a winning formula of rehashing their animated glories of the past.

Seeing as this practically faultless piece has already earned a packet, expect a flurry of others to come (according to Cosmopolitan magazine, there will at least be live action versions of Mulan and a 100 Dalmatians spin-off about Cruella De Vil up until 2019).

Besting their acclaimed 1991 version of this fairytale was no mean feat. The film is fondly recalled by many (even a non-animation person such as myself) and was the first completely animated film to receive an Oscar nod for Best Picture.

The writer’s were clearly aware of this and have whacked on a whopping extra 45 minutes. The original script was as tight as a button, but with this extra canvas to paint on, they haven’t actually strengthened the story – it feels like there is a lot of padding all over.

Kevin Kline as Maurice and Emma Watson as his daughter Belle in Beauty and the Beast (2017). Image courtesy of Disney.

The musical numbers still win (especially the riot of colour that accompanies the Busby Berkeley inspired Be Our Guest sequence, easily outstripping the original version), but this is sometimes extended to breaking point. During Gaston’s mostly rousing bierkellar routine, LeFou (Josh Gad) ends the song with an excruciatingly poor lyric about not being able to spell his master’s name.

We get drawn-out back history to the main characters, especially The Beast during the opening sequence. Considering this is mostly a shot-for-shot remake of the 1991 film, this grand ballroom dance seems like folly.

But it looks the ticket, like the rest of the film, so why blather on about such things when the whole film is gloriously sturdy, sweet and overdone, like a Christmas pudding with the finest icing on top.

Looking good. Beast (Dan Stevens) and Belle (Emma Watson) dance the night away to ‘Tale As Old As Time’ in ‘Beauty and the Beast’ (2017). Image courtesy of Disney.

Any film that gets me to like the woman I usually refer to as the ‘acting accident’ Emma Watson is one to be admired; she is effortlessly graceful and charming throughout. I’ll leave aside her contradictor public announcements about her ambassadorial role promoting feminism as these irk me and would form an entirely different conversation, but her Belle turns out to be one of her most comfortable and successful non-Harry Potter acting stints. She also sings, quite pleasingly, but is no match for the vocal skills of Paige O’Hara.

Emma Watson is the Belle of the ball in Beauty and the Beast (2017). Image courtesy of Disney.

Perhaps she will further traipse up the garden path as a Disney Princess in future, but what we see very clearly is how thoroughly entertaining and chameleon-like a screen presence her co-star Evans is becoming.

As the priggish and self absorbed Gaston, Evans has a solipsistic ball of his own, hamming it up with prime panto splendour (although the frequent shots of his tight britches should carry an 18 rating of their own). 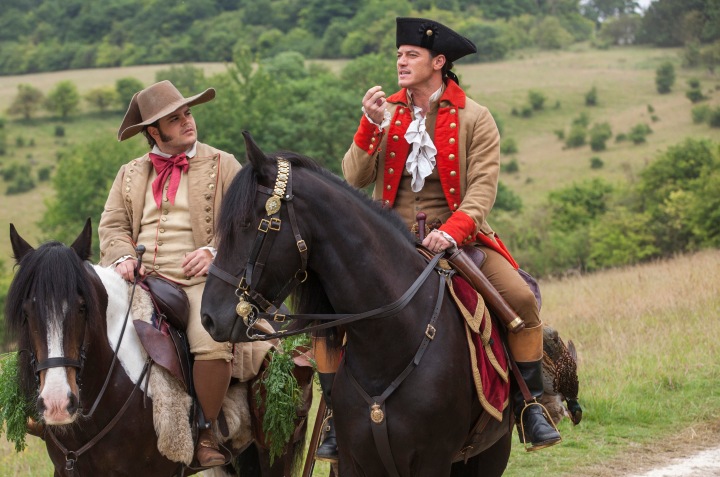 No one rides like Gaston! Josh Gad as LeFou and Luke Evans as Gaston in Beauty and the Beast (2017). Image courtesy of Disney.

Despite controversy about the incipiently homosexual relationship between Gaston and his dippy man servant LeFou (played with wonderful comic aplomb by Gad), this supposedly ‘first ever gay moment’ in a Disney motion picture is tame and more amusing than upsetting.

For Disney then queer characters and situations are only permissible if they carry a jocular tone and are presented as a satirical take on wider heteronormative society (LeFou’s comments ape those of a long-suffering wife).

Contrasted with the overall story about a human falling in romantic love with what looks like a bison (“Who could learn to love a beast?” the narrator tells us), are we to assume that bestiality is more acceptable to the studio than same-sex love and longing?

Still, without meaning to beat my LGBT drum too loudly, its a start and the old studio is to be encouraged for making a bold first step, hopefully the first of many.

One step the film remains entirely stuck in is the hypocritical, nurses morality. Beauty is only skin deep we are told, one’s inner character is what matters. But we are left in no doubt that physical beauty has a paramount and transformative impact, not only cementing romantic love between Belle and the Prince (formerly known as Beast) but on wider society, who are brought out of their amnesiac slumber at the very moment the Prince’s handsome face is reinstated, as tip-top as his formerly mouldering abode.

Director Bill Condon (Gods and Monsters, 1998) has musical experience, having directed Jennifer Hudson to an Oscar in Dreamgirls (2006) and written the screenplay for Chicago (2002). He conjures up a warm, dreamy atmosphere, peppered with fun and ingenuity (the donkey-led washing machine for instance is a very pleasing addition) and, despite the longueurs, never strays too far from the established Disney template for success.