After witnessing a bank robbery, Joe (Michael Caine) can’t get the artistry and organisation of the criminals out of his head. When he and his steel worker colleagues Willie (Morgan Freeman) and Albert (Alan Arkin) are informed that their pension is going to be forfeit by their employer, the three decide to rob a bank themselves. But, being old and infirm, this requires quite a lot of planning.

He swaps the characters’ rage at getting old in an America obsessed with youth and replaces it with the lightest comedic sheen. The film twinkles like the eyes of this exceptional cast of mature film actors. 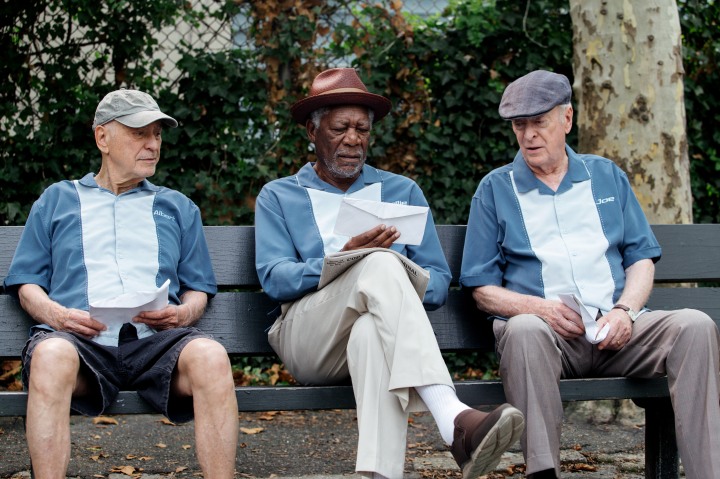 It’s also brought up to date with a narrative wrapped in post-credit crunch, personal finance angst. Caine’s bank is soft and fluffy on arrival, the receptionist’s polite customer service tones belie the nasty and patronising financial history he gets as he moves further up its food chain. He receives more humanity from the friendly bank robber, who tells him Joe will never be anything to the bank than his account.

These hip replacement heist hombres aren’t criminals however, they tell us they are merely taking what is rightfully theirs. Joe meticulously works out the amount they need to replace what their employer Semtex (an explosive name for the steel company that happily blows up their retirement plans) has swindled from them. But later, just before Joe puts his own robbery into action, we see him behind the wire of his granddaughter’s school yard fence, visually putting him behind bars despite the aim of his mission.

So Braff and writer Melfi have their finger on the topical, newsworthy pulse and the film, not displeasingly, dawdles along at the rate of your average pensioner taking a trip to the loo. They have the best cast who play to the hilt and prove they could have pushed further, had the too gentle script not let them down.

Arkin in particular is a stand out, but then he is always good value for money in support and has cornered the market playing quick witted, sarcastic old timers. He even gets a few asthmatic sex scenes with Ann-Margret’s breathily wanton supermarket girl. 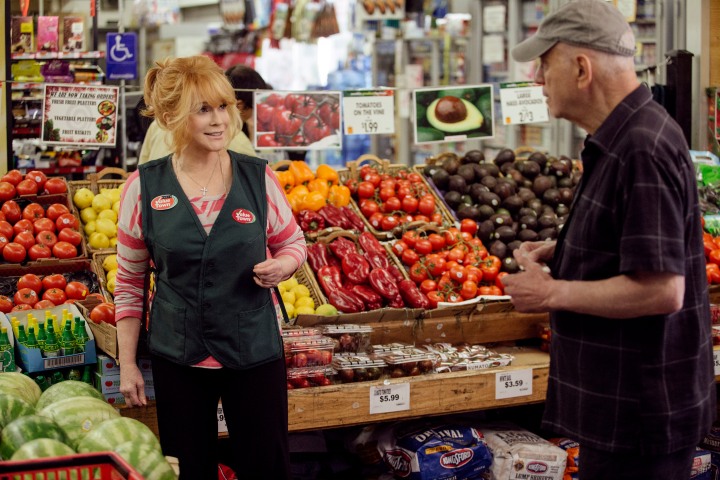 Checking out? Ann-Margret and Alan Arkin in Going In Style (2017). Image courtesy of Warner Bros.

What they and this film really needed though was a few more giggles. Thankfully, Melfi hasn’t gone down the Last Vegas (2012) road of “I have haemorrhoid’s older than her” old man jokes, so what laughs we have aren’t toe-curlingly obvious. But this movie is crying out for the smart-ass, retiree observational humour it seems set to give.

For some reason, Melfi steers a course away from that toward something beige and bland, but its a stylish beige that at least raises a few smiles.