Vincent (Jamie Foxx) is a Las Vegas cop who works undercover for Internal Affairs, along with his partner Sean (T.I.). But Sean is working with (and triple-crossing) a corrupt I.A. detective, who is protecting members of a notorious drug cartel. After Sean steals a shipment of cocaine, the cartel kidnap Vincent’s teenage son. Vincent has to go rogue to rescue him from the casino of mobster Rubino (Dermot Mulroney). I.A. Detective Bryant (Michelle Monaghan), who has long suspected Vincent of being dirty, goes to the casino to apprehend him, but places herself in danger.

My one bug-bear as a Press Officer is using repeated words in a media release or statement in close proximity.

The thesaurus is a wonderful publication and I make frequent use of it, to avoid making such excruciating communications schoolboy errors.

The same cannot be said of the writer of this hackneyed, derivative police thriller. If Andrea Berloff even has a thesaurus, I’d be surprised.

To be completely honest, Sleepless is not an awful film. It is a poorly written and unconfidently handled cop thriller, but is so like any other passable police procedural piece, it stacks up relatively neatly alongside them.

(For the organised archivists amongst you, this would sit on the same DVD shelf as your Law & Order collections; before Criminal Intent but after SVU).

The constantly twisting and turning narrative, although actually predictable, turns the story into an amusingly knotty one. Eventually, it gets so tied up in its own convolutions it appears the writer and director have shrugged their shoulders, shouted ‘Meh!’ and let events run their course until they have run out of steam.

But this is at least in-keeping with the audience’s reaction, one of tired resignation and hope that the experience will quickly finish.

Sleepless felt a bit like a film production graduate’s first shot at the big time: all of the elements are there to make a satisfactory film, all that’s needed is a bit of confidence, some brio with the action scenes and snappy, coarse dialogue.

As an example, there is a shoot-out between two groups of people. Always a great way to start a film, lots of noise, use some fast paced editing to up the momentum and show off some fancy camera moves.

There is none of this in this opening scene; everything is staged in a very perfunctory manner.

Later, Foxx and T.I. argue in the gents after Foxx’s son has been kidnapped and he has been stabbed, with T.I wholly responsible. This brief scene should be loaded with action and drama, but instead feels clunky and handled with uncertainty as if by an amateurs hand.

As for further examples of lazy and sloppy elements:

I got the feeling throughout that this was supposed to be set in a playground, rather than ‘nasty’, murderous, drug-fuelled adult Las Vegas.

Pity poor Foxx then, who is visibly aware of the limitations this film and the crew are affording them. A fine, funny and gifted film actor, whether imbuing crooner Ray Charles with cheeky relish in the biopic Ray (2004, and scooping the Best Actor Oscar) or showcasing a brooding hero in the western Django Unchained (2012), he is an actor who has shown his versatility. 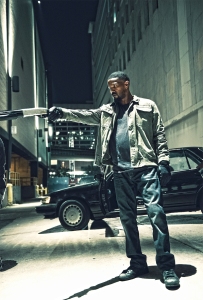 He wanders through the unravelling ineptitude of this film with understandable wide-eyed shock and embarrassment.

Mulrooney and McNairy are better value as the sleazy baddies, but then baddies always have more fun.

The film is left wide open for a sequel, that audiences should pray never sees the light of day in the hands of this team.

But most importantly, at least for this critic, after all of the above discussion – what happened to Steve.

Poor Steve, who is to be married to Foxx’s ex and is completely forgotten in the final, family reunited moment.

I feel sorry for Steve; best wishes mate, but its time to move on. You can do better.

See the trailer on the official site.