Guest blogger and my former colleague Jo Szreder, from The Blond Travels, has been living and working in Thailand for a few years now. I asked her what it’s like going to the multiplex there. Despite the similarities, there are some interesting additions.

Have you ever wondered if movie theatres in other countries are different to those in the UK? Would you ever go to watch a movie in places like Cambodia, or India? Would you expect it to be an adventure?

Cinemas in Thailand were once a mystery to me. I never expected anything much from them and going to a cinema here was the last thing on my mind. But when I first moved to the ‘Land of Smiles’, I decided to give it a go – and it was lovely! I have become a great fan of Thai cinemas and since then I have always tried to go to a local cinema every couple of weeks.

Going to a cinema here is comfortable and affordable, and can be a very pleasant experience for anyone looking for some good entertainment.

Where to find cinemas in Thailand?

All major cinema websites have information in both English and Thai, so if you are in Thailand you can easily find your local using Google. Most of the bigger towns and cities have cinemas. Nowadays even islands such as Koh Samui have their own multiplexes. It’s not hard to find them.

Bangkok, the capital of Thailand, has a lot of cinemas. Among them you will find modern ones, but also some old school ones, too. It is probably the only place in Thailand where cinemas from the 1970’s are still open.

I live in Chiang Mai, the second largest city in Thailand. There are quite a few cinemas here and every single one of them is situated in a shopping mall.

An average cost of a ticket for an adult is around 100 Baht, which is £2.50. Some cinemas in Thailand offer VIP tickets, which include a private lounge, a drink and some snacks. This only costs 400 Baht (£9). You can also find tickets for couples and those include a double seat and a blanket.

You can book your tickets online, or buy directly at a counter before the movie. There are always English speaking staff that are extremely polite and helpful and you shouldn’t have any problems with communicating.

Most cinemas accept credit cards, so don’t worry if you don’t have any local currency with you.

I am a huge fan of snacks before a movie and love a good portion of popcorn with some Coke. Thai people love to snack and you are sure to find some great nibbles in the local cinemas. Some of them are the same as the ones you find in the west, like salty popcorn, or nachos, but sometimes some of the venues try new things and for a limited period of time you can buy a box of garlic or chilli flavoured popcorn. 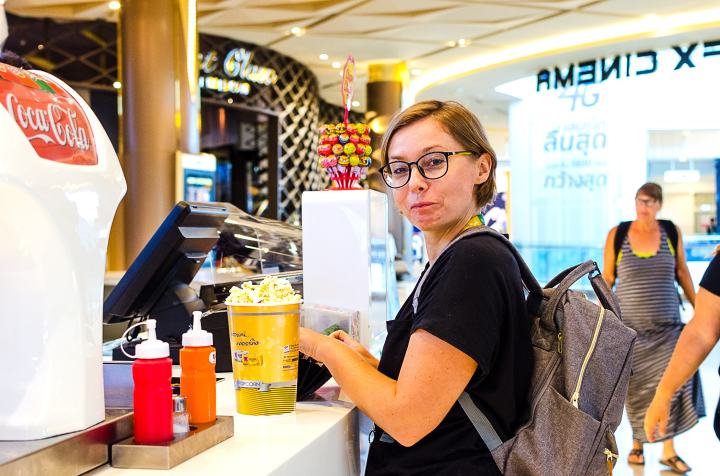 Most of the movies in Thailand are in English with Thai subtitles.

More popular Thai films also have English subtitles. I have seen a few of them and must say that it was an interesting experience. If you are in Thailand and want to find out more about the local culture, going to see a Thai film in a local cinema might help you with this.

Don’t expect a huge array of movies in cinemas in Thailand. Most of the theatres show big blockbuster films and hardly ever do they allow something a bit more ambitious than the Spiderman, or Fast and Furious.

If you want to see something less commercial, your best bet is to find a gallery, or an art space that do movie nights. In Chiang Mai the most popular venue for those is Documentary Arts Asia.

In bigger cities and towns some of the cinemas organise film festivals. For instance, in Chiang Mai one of the shopping malls hosts The European Union Film Festival, during which you can see films produced by the EU countries. A few years ago I went to see a Polish movie and invited my English and American friends to come with me. However, my friends ended up not going because, as we were told by the cashier, the distributor had forgotten to add English subtitles to the movie. 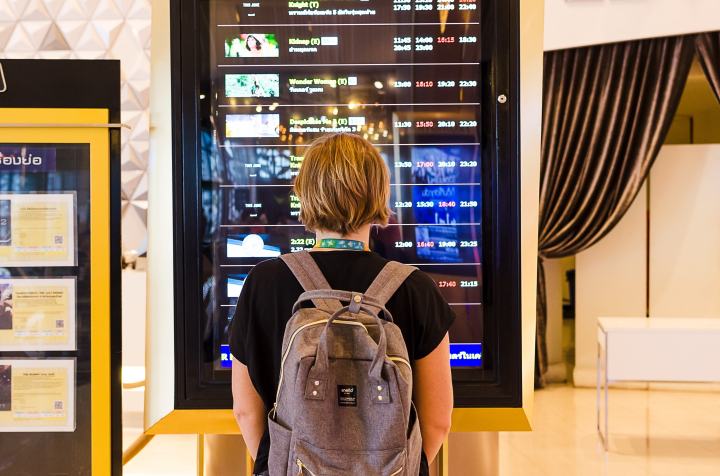 In a cinema in Thailand

Once you buy your tickets and drinks and enter the cinema, you will probably be enveloped in icy cold air. Thai people love air conditioning and very often the temperature in the cinemas is very low. That’s why never go to see a movie in Thailand in your shorts and a tank top. Wear something that is warm and take a jumper with you, just in case!

The seats are very comfortable. There are a lot of space for legs and in some cinemas you can even lean back a little. You can easily sit through a 3-hour movie and not feel achy afterwards.

As with any other cinemas in the world, in Thailand you will also have to endure trailers and around 20 minutes of commercials. These are usually a mix of English and Thai adverts. If you don’t want to watch them, you can simply check the cinema’s schedule and you might find that the venue also gives some details on how long the adverts will last, so you can skip that part of the experience.

See this trailer of a Thai movie.

Thai people are very devoted to their King. His portraits can be seen almost everywhere and the country has a strict law when it comes to offending the monarch.

Before every movie, cinemas all over the country play an official song that honours the King of Thailand. On the screen you can see people with pictures of the King and some scenes from his life. During the song everyone needs to stand up and wait until the end. You are obliged to do it even if you’re not a Thai citizen. Not following this custom can result in a punishment, such as imprisonment for as long as 15 years!

Listen to the Royal Anthem here.

In general, going to see a movie in Thailand is great and very affordable. It is not much different from what you’re used to, but it’s still an interesting experience. If you spend some more time in the Kingdom, it’s a great way to entertain yourself, which will also give you some insight into the local life.

Joanna Szreder is a blogger, an English teacher and the founder of OK English – Angielski Online, where she teaches the language to Polish speakers. She has been living in Thailand for 3 years now and writes about her adventures on The Blond Travels blog. You can also find her on Facebook and Instagram.