New Jersey based Patricia, aka Patti Cake$ (Danielle McDonald), lives with her loving but infirm Nana (Cathy Moriarty) in poverty following a medical insurance bill after Nana’s latest treatment. She works zero hours contracts by tending bar at night and for a local caterer, but she dreams of becoming a rap artist and escape the grime and grind of her home town. But who will take notice of an overweight, white woman who wants to battle it out against more establish men on a traditionally black music scene? Teaming up with her best friend (Siddharth Dhananjay) and a reclusive black rocker (Mamoudou Athie) she records a demo album and makes a break for the big-time.

The critics seem a bit divided by this Cinderella meets Eight Mile (2002) fable, a ‘Grimy Brothers’ fairy-tale if you will, set not in the gleaming, clinical, Disney beauty of far far away, but slap bang in the middle of the oft-depicted, grinding (but not always cheerless) poverty of modern-day New Jersey.

(For those unfamiliar with New Jersey, it is the fourth smallest but 11th most populous of the 50 states that comprise the USA. New York touches it’s North Eastern border. Find out more about it here).

In this working class hero fable, as derivative as any other, every standard character is inverted as four social outcasts go Into the Woods to gain some urban-music creativity, personal insight and to generally rock out:

From all of these people, ‘our’ Patti (for she is ours; chronicling the youthful dreams and aspirations to take on the world we all had when young), frequently derided as Miss Piggy or Dumbo, comes into her own with some introspective insight and choral confidence. Shyly avoiding eye contact with strangers when we first see her, she squares up to an intimidating ‘street-off’ with the confidence of a rookie boxer after he wins his first bout.

As music is tightly wound up within her mitochondrial DNA (her mother is a failed singer, once tipped for the big time) and part of her everyday life (she creates lyrical verse whilst brushing her teeth and going for a pee), the ending shouldn’t surprise you too much, especially when it is contrasted with the deathly company Patti endures at the bar, quietly slogging her guts out to escape.

McDonald is instantly likeable in the lead role, a podgy, no-ivory towered heroine, breathing new, working-class life into the fairytales of old live. She takes on gauche, brave and fun and succeeds in equal measure.

A believably rough-around-the-edges set of supporting performances, particularly Everett as Patti’s brassy but loving Mom, jostle for attention. Everett records a hit because she never agitates our sympathies too much. She had her shot at the big time, missed it and now loves a drink. But despite the humiliations of failure, her powerful voice can still carry a whiskey-sodden tune. 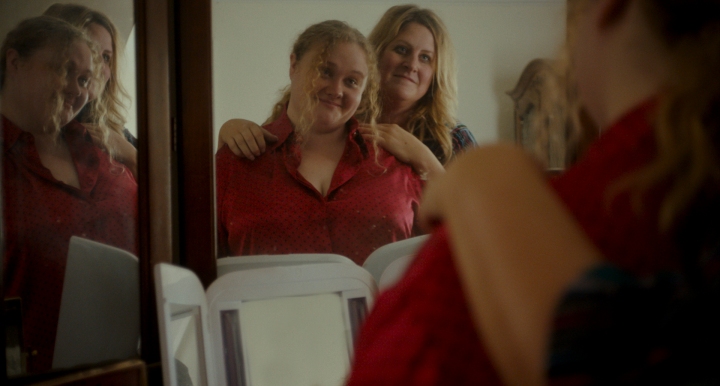 This is is a funny, sharp and lovable story making vibrant use of the fluorescent, primordial green colour scheme of the dream sequences with the fictional rap artist ‘O-Z’ whom Patti worships. Its the green of the US dollar she chases and also Frankenstein’s monster. A monster who was created by a benevolent scientist, much the same as Patti hopes O-Z will do to her.

But as we know from Mary Shelley’s novel, the act of creation is tinged with nightmarish, moral lessons. Fingers and toes crossed for Patti’s possible musical future, then.

(NB: One of the producers is Home Alone maestro Chris Columbus that might explain why the whimsical tone feels so bang on target).

For more, see the official trailer.