17 year old Rose DeWitt-Bucater (Kate Winslet) embarks from Southampton to New York to return to her native Boston, aboard the mighty RMS Titanic, about to set sail on its first voyage. She will marry her companion, the rich and handsome 30 year old Cal Hockley (Billy Zane) on the wishes of her snobbish mother Ruth (Frances Fisher). Rose wants nothing more than to escape the two of them and the confines of her constrictive life as a society darling. One night, she tries to commit suicide by jumping off the stern of the ship, but is pulled back by poor artist Jack Dawson (Leonardo DiCaprio). They begin a romance that her mother and Cal attempt to crush until Titanic strikes an iceberg. It becomes apparent the ship will sink and the race is on to survive disaster.

I first saw Titanic at the cinema during its initial theatrical release in 1997 with a group of suitably cynical university friends.

All of us chuckled at the high romance the media junket made clear formed the heart of the movie, but there were more serious issues at stake with this lavish disaster drama.

I had been eagerly following the movie’s creation and really wanted to see if the makers had pulled a cracker or undercooked a turkey. From the troubled production (director James Cameron’s near-breakdown during filming), wildly improbable final budget (around the $200m mark) and naysayers prophesying doom all round (it was theorised that, as so many key Hollywood players were tied up in the film if the film flopped, a domino effect of bankruptcies could sink the whole of La La Land), this was more than just an event movie. Moviedom itself was at sake!

Thankfully, that didn’t happen and, like the real-life disaster this movie chronicles, we all know how that story ends. With a total international box office gross of more than $2bn, a haul of 11 Academy Awards (including one for Cameron as Best Director) and Leonardo DiCaprio and Kate Winslet both quickly becoming box office champs and respected film actors (titles that still hold to this day), Titanic became more than just a success.

I liked how the movie toyed with how well we know the ending to the true story of Titanic‘s demise. Even my friends and I, with a good general knowledge of history, held our breath in the wonderfully tense moments just before the ship hits the iceberg, imagining for a few seconds that Titanic would sail past it toward some blandly happy ending. After she breaks in two, the stern momentarily bobs up and down in the Atlantic like a cork and I could see people in the audience shifting forward in their seats, a few muffled gasps, as if Titanic might not actually sink.

Due respect then to Cameron and the production team for instilling this sense of expectation in worldwide audiences, most of whom would have been familiar with the tale being told, as we were. 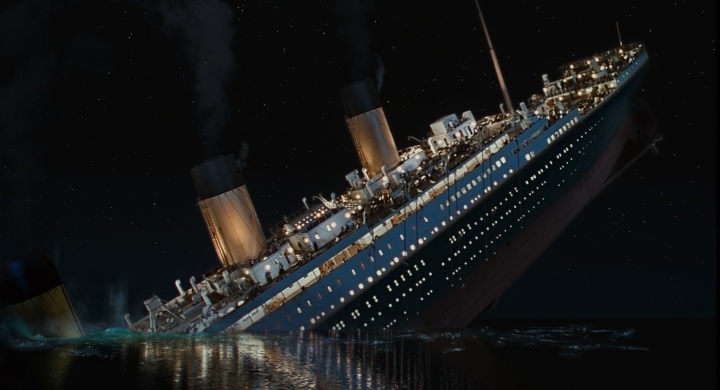 That sinking feeling…RMS Titanic goes down, down, definitely down, in Titanic (1997). 20th Century Fox/Paramount/Lightstorm Entertainment.

Well done to DiCaprio and Winslet who, saddled with the corny romantic plot device around which Cameron grafts his technically dazzling production, manage to rise and make sure they are both seen and heard. They contrive to make us believe this cutesy couple could actually have existed, have met on the ill-fated liner and, despite their vastly different background, romanced each other.

In the immediate post-Titanic years, it was easy to dismiss DiCaprio as a blonde pretty boy with only a particle of talent. But he proved his worth and Cameron’s faith in a relative unknown and, through selecting choice roles in interesting films, he quickly became one of the most sought after leading men in Hollywood.

His Jack Dawson is not the best part he has played, but with youthful vigour and the devil may care attitude of a poor artist (albeit one with suspiciously good hair, straight white teeth and perfectly matt finish skin), he sails through as a young matinee idol in the making.

Winslet, too, was relatively new to movies, having made her debut only three years previously, in Peter Jackson’s Heavenly Creatures (1996). Playing an emotionally neglected, suicidal society girl he not only looks stunning, but acts her socks off as an outwardly fragile young woman who is inwardly independent and resourceful. She is most impressive in the scenes where she challenges the social conventions of the upper classes: practising spitting on the promenade deck, dancing and drinking ale in the steerage dining room, having guilt free and  enjoyable sex in the back seat of an old automobile.

(NB: American essayist and social critic Camille Paglia noted of Winslet’s performance: “She should get the Oscar for best bust. Anyone with those two floaters doesn’t need a lifeboat”).

The too incredible flashback narrative, hinged on the recollections of a dotty but engaging 100 year old Titanic survivor, is ridiculous and nonsensical (would such an elderly woman abandon her life to travel and see a group of salvage experts in the middle of a cold ocean? Why would these hardened professionals accommodate her, when a simple phone interview would do?).

It’s a clunky melodramatic addition, albeit with a spirited, fun and frank performance from 1930’s leading lady Gloria Stuart. Stuart, who hadn’t appeared on screen since the early 80’s, had once been the female lead in James Whale’s horror movies The Old Dark House (1932) and The Invisible Man (1933). (Original choice, Fay Wray, declined Cameron’s offer).

Stuart’s clear-eyed charm, cheeky humour and slightly naughty, octogenarian sexiness nabbed her a Best Supporting Actress Oscar nomination and a flurry of roles in other big screen and TV films shortly before her death in 2010.

Frances Fisher as Winslet’s steely, snobbish mother and Kathy Bates as the raucous, real-life Margaret ‘Molly’ Brown (who earned herself the soubriquet ‘Unsinkable’ for her larger than life personality and for surviving Titanic) more than make up for them.

Perhaps it isn’t all Nucci’s fault for the script oscillates between the most awful and the most delicious, prescient of dialogue. Of the former, we have two ‘cockney’ lookouts:

Smell ‘oice’ can ya? Bleedin’ Chroist!

Freud, who’s that? Is he a passenger?

Of the latter, Fisher explains to her daughter about how ‘precarious’ their position is, society women with no money and no man to support her, hence why she is marrying her only child off to a man she suspects is abusive. This brief speech reminds us what life was like for women before the political, legal and societal changes that brought them the equality we fight for today.

The top-drawer special effects included a mix of model miniatures, CGI, submersible filming around the actual wreck of Titanic and, most amazingly, a near life-size replica of the ship, stationed in Mexico and which was partially sunk for exterior shots. There is a massively impressive sense of catastrophe here, eschewing the polite half-screams and ordered panic in the otherwise superior British movie A Night To Remember (1958).

Funnily enough, it’s the effects you don’t immediately notice that are worth nothing. The breath from the actors’ mouths were digitally added post-production (these scenes were filmed in heated water tanks) and also the quality sound effects, such as the pinpoint accuracy that picks up the individual actors singing Sunday service hymns and the ever audible sound of the ships innards creaking and moaning.

James Horner provides the clever mishmash of olde Oirish folke music mixed with Hollywood glamour, allowing Celine Dion to belt out the ultimate movie power ballad, Horner’s own ‘My Heart Will Go On’. For all the critical derisions, it promoted Dion’s mighty vocal range and was the biggest selling single of 1998 (as of today, it is the eighth best selling single of all time).

For the final, summary commendation, I return to Cameron, who showed his metal and entered the upper echelons of American movie-making with this film. Full credit to him for making this movie slick, involving and even moving so that it’s hard to believe it is over three hours long, so swift a rate it proceeds at.

NB: A young Ioan Gruffudd has a small role as a junior officer who returns lifeboats to pick up survivors left in the sea.