Film review by Claire Durrant of Three Billboards Outside Ebbing, Missouri, the comedy starring Frances McDormand about a mother who takes action when the police fail to progress an investigation into her daughter’s murder.

Several months have passed since the brutal murder of Angela Hayes with no arrests having been made. Mourning mother Mildred (Frances McDormand) rents three abandoned billboards calling out the police officers for their lack of action – mainly Chief Bill Willoughby (Woody Harrelson.) The townspeople are unhappy about the attack on their beloved Chief, especially Officer Dixon (Sam Rockwell), who all start to turn against Mildred. Mildred prepares to go to war on the town of Ebbing, Missouri as she believes the longer the murder case stays on people’s minds, the more likely they’ll have a breakthrough and solve it.

Just give me a good narrative!

I don’t need CGI, special effects and excessive action scenes to enjoy a film. While they can add to the overall spectacle of watching a film, I’d rather watch engaging characters in a subversive screenplay filled with witty and sharp dialogue.

Filmmakers associated with this type of narrative include the juggernauts Quentin Tarantino and Shane Black. Then there is the lesser known Martin McDonagh, who is no less impressive.

McDonagh’s first film In Bruges (2008) was an underrated yet favourable hit, and his second film Seven Psychopaths (2012) was fun, but met with less favourable reviews (though I still believe the film gets better the more you watch it.)

Three Billboards has McDonagh back on top form, as well as justifying him as one of our greatest modern writers. Unlike his previous two films, Three Billboards holds more gravitas with its serious subject matters.

The film at times is excruciatingly uncomfortable, bleak and entirely pessimistic, yet I was laughing throughout. No, this is not because I’m a psychopath, but because McDonagh is masterful at writing dark comedies.

The success of this brilliant film is also due to its stellar cast, with Frances McDormand, Sam Rockwell and Woody Harrelson leading the picture. Harrelson, who is a perfectly versatile actor, is of course great as the sympathetic Chief Willoughby, but it’s the former two stars who steal the show.

Rockwell’s Officer Dixon is obnoxious, offensive and horrible, everything a police officer shouldn’t be. Yet his character arch is beautifully written and further illustrates just what a good narrative can do. Dixon is racist, homophobic and a genuinely foul person, but you feel for him at the end. Rockwell is at his best here!

Then there is McDormand who gives one of my favourite female performances ever as Mildred. She is a female Dirty Harry. Unapologetic in her behaviour, she is strong, determined and kicks ass (and other parts of the body.) Still, Mildred is sincerely realistic as a mother grieving the violent death of her daughter. This is McDormand’s greatest role since her Oscar-winning turn in Fargo (1996). 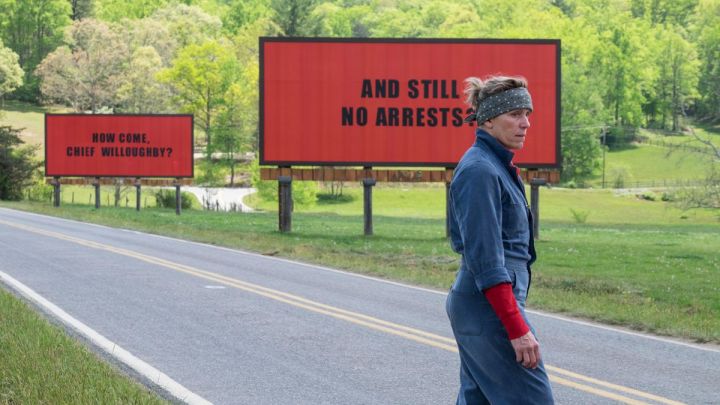 How to get ahead in advertising: Frances McDormand in Three Billboards Outside Ebbing, Montana (Blueprint Pictures).

McDonagh likes to collaborate with the same actors, Rockwell and Harrelson having worked previously with him. I hope to see him partner with McDormand again.

With Rockwell and McDormand winning awards in their categories at the Golden Globes, I don’t think I’m foolish in saying that they are a shoo-in for Academy Award nominations, with McDormand taking the shiny Oscar home that night. McDonagh should hopefully and rightfully get recognition with his screenplay also.

Three Billboards is simply a tour de force of a film. It’s unpredictable and rebellious in its narrative structure. You will not receive answers, but you will enjoy watching these untamed characters interact, to the point that your only problem with this film is that it ended. I can’t wait to see what McDonagh does next.