Film review by Jason Day of Beast, the modern fairytale about a young woman who is torn between her controlling family and a stranger suspected of brutal murders.

Use the search function on the left of the screen to look for other reviews and updates.

Young Moll (Jessie Buckley) lives with her cold and controlling family who monitor her movements and relationships after an incident years before when she stabbed a class mate. After an impulsive, drunken night out she meets Pascale (Johnny Flynn) a stranger who also has a violent past and who saves her from a would-be rapist. They quickly fall for each other, despite her family’s opposition.

Suspicion falls on Pascale after a number of teenage girls are found strangled. Jess has to deal with the anger of the local community and her love for Pascale and decide what and who to believe.

I love a good indie film and modern day fairytales, so had high hopes for this twist on the classic Beauty and the Beast with Jersey Royal spuds thrown in, as direct a contrast to Disney’s lush and lavish recent live action version as you could imagine.

Sweaty humping in the front of a dirty stagecoach? Stomping on a cute, fluffy bunny rabbit’s head? Not on Emma Watson’s watch!

The sticky fumblings in this version give Pearce’s otherwise inadequately handled anything-but-romantic fable some much needed oomph and there are other good things about it.

Jessie Buckley, who received rave reviews for her turn as Princess Mariya in BBC’s recent War and Peace makes Moll a becalmed twenty something whose unassuming exterior of acquiescence hides wild, untamable rebellion. Her slightly plain, but far from unattractive, appearance also helps shield that true self. 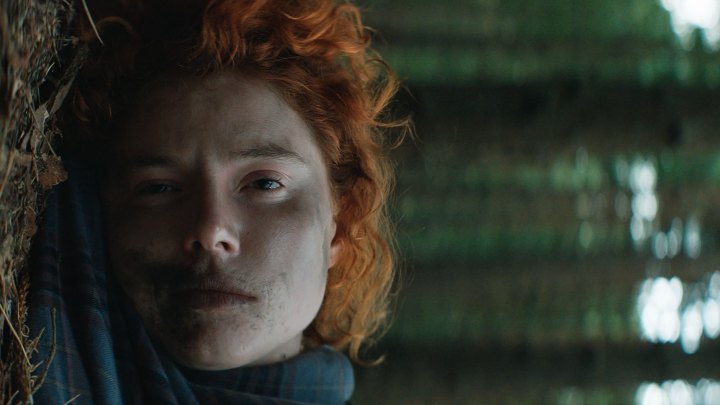 Low down and dirty…Moll (Jessie Buckley) is in a grave place in Beast (2017).

The chandelier that dangles like a stalactite in her Mother’s (Geraldine James) austere, beige house respects the icy cave she is restrained in. But Moll frequently fantasises about escape and freedom from this most stultifying, polite-nasty clan headed by a Mum who denigrates her daughter in front of others and then adds a bittersweet sting at the end: “There we are. Friends again!”

Whether by self harming during her birthday (scuppered by a passive aggressive sister who chooses Moll’s special day to announce her pregnancy) or dreaming of walking out the door in the dead night after being murdered by the faceless psycho rampaging across the island, a new life is only a few steps away. It might as well be on mainland England.

Jess fiddles with the stigmata like wound on her hand during moments of stress, religiously symbolic of suffering and an aspect of Jess that her domineering Mum might actually suffer.

Flynn is a surly, gruff ‘Beast’ to Buckley’s Belle, with a mane of unkempt blonde locks to match his lion’s beard.

But that, unfortunately, is about all that’s notable.

Sometimes it’s interesting to see how poor such right-on, mouthy indie flicks can turn out, despite the promise of something quirky and enlightening.

In a film that is slow to start, slower in the middle but quickly spins out of control at the end, Beast is, apart from those few peeks of light through the dark, never goes the distance.

Scenes that are meant to convey a deep meaning are miles off course. Moll attends the funeral of one of the murdered girls and is accosted by some of the locals. She screams at them and they run away, looking as if they are unsure of their director, rather than being genuinely alarmed.

Moll returns to the shallow grave of that girl and sleeps in it. Fine. Interesting, even. Then, weirdly, she covers herself in the soil and eats some of it.

These two scenes, baffling in their ludicrousness, had myself and members of the audience either whispering comments of disbelief or in absolute fits.

Pearce completely chickens out with the ending, too. After perfectly setting up what could have been a devastating ending with our two anti-heroes riding off into the distance, he instead goes out with a pathetic whimper.

A missed opportunity that you should definitely miss.