Film review, by Jason Day, of Death on the Nile, the all-star adaptation of Agatha Christie’s classic whodunnit about the murder of a socialise on board a Nile steam cruiser in the 1930’s. Starring Peter Ustinov and David Niven.

Use the search function on the left of the screen to look for other reviews and updates.

Linett Ridgeway (Lois Chiles) has everything. She is young, rich and beautiful. But she is also lonely and has a penchant for nastiness.

When her comparatively mousy best friend Jacqui (Mia Farrow) brings home her new boyfriend (Simon MacCorkindale), a handsome but impoverished Estate Manager who Jacqui thinks hold be employed by her rich pal, Linnet falls in love and the feeling is reciprocated.

A whirlwind engagement leads to marriage and they are blissfully happy, much to the consternation of those around them. Jacqui, devastated by the betrayal, follows them on their honeymoon, ending up on a Nile river cruise. Also aboard are a motley selection of passengers who also hold a grudge against Linnet, from her lawyer (George Kennedy) to a romantic novelist (Angela Lansbury) who faces ruin if Linnet sues her for libel. Famed Belgian detective Hercule Poirot (Peter Ustinov) joins them and the game is set for murder.

This was the first, groaning at the seams with chocolate box beautiful locales, guest stars in need of quick cash and a free holiday and Ustinov’s gut on the waistline of his impeccably pressed trousers.

Sleuth supremo Anthony Schaffer did an uncredited polishing job on the script to Orient Express but is given full licence here. A little too much licence as it happens: the film is stretched out, rather tediously, to a full two hours 20 minutes in duration.

A creeping sense of ridiculousness (acknowledged by Poirot as the body bags stack up) was unavoidable, as the production pads out a dull mystery to the point that, like Ustinov’s trousers, the film threatens to spill out all over the lovingly designed boat’s decks.

All this despite the stinging one liners Schaffer drops throughout the movie and his ability to bring to life the morbid characters in the story. 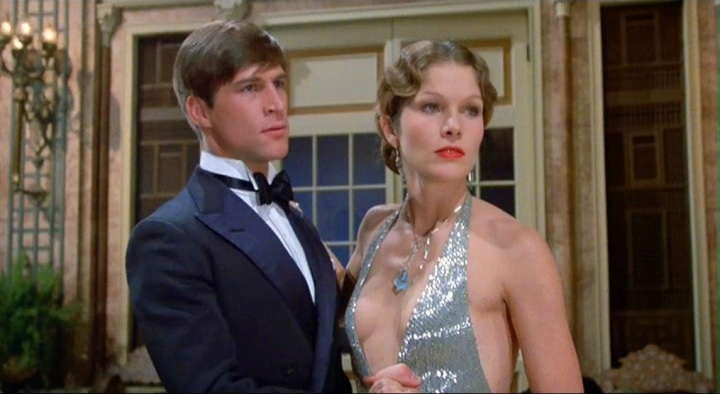 Getting abreast of the situation: Simon (Simon MacCorkindale) and Linnet (Lois Chiles) feel murder is upon them in Death on the Nile (1978).

Christie film adaptations suffer from a polarisation of people, either the great or the grim. Here, of the glorious we have:

And of the ghastly, we have to tolerate:

It is to director Guillermin’s credit that using the ever urbane, always watchable Ustinov as the keystone for which his rogue’s gallery of suspects is built upon, he just about controls their tendency to out ham each other, as if grandstanding will ensure them greater attention from the editor in the cutting room.

Davis in particular is guilty of this. Acting slowly, as if reading her script from an autocue powered by an arthritic hamster she stops more often than she starts, straining over every word. Now, Mr Editor (Malcolm Cooke), you can imagine her thinking, cut around that!

Of the whole cast, Niven gets the best lines. “Yes, I’d forgotten your opinion of yourself” he says, after one of Poirot’s more egregious speeches. Later, after Hercule quotes Moliere in French, he advises: “I do wish you’d speak some known language”.

Jack Cardiff is the cinematographer with the mostest and he captures the impossibly sunny Egypt and unbelievably sunny English countryside with Olympic impartiality.

He ensures the entire production has a ravishing, Teflon quality…it all shines, but nothing really sticks, despite being overcooked all round.