Film review by Jason Day of the movie Florence Foster Jenkins, in which Meryl Streep takes the title role, a tone deaf singer who finally achieves her dream of singing to an audience, despite the fact she is tone deaf. Co-starring Hugh Grant.

Florence Foster Jenkins (Meryl Streep) is an elderly, wealthy patron of the arts in 1940’s New York. She is notable donor to a small theatre that allows her and her husband, the English actor St. Clair (Hugh Grant) the chance to realise their theatrical ambitions, he reciting theatrical verse and she headlining tableaux.

Florence, however, has always wanted to be a singer, but has hitherto been thwarted in this ambition…because she literally cannot carry a note. Florence is tone deaf, but all she can hear when she opens her mouth is sweet music.

Imbued with confidence, she hires pianist Cosme McMoon (Simon Helberg) to help fine hone her vocal ‘talent’. She finds herself swept up in popular hysteria after a recording of her singing is leaked to the public…but how will she deal with the fact people are laughing at, rather than with, her?

Florence Foster Jenkins is a mere footnote in musical history, so thank God for this movie, helmed by the estimable Stephen Frears who is so adept at teasing out arresting but hitherto unknown stories about female resilience and accomplishment that mark his oeuvre of late.

This is the man who, after all, ‘humanised’ Elizabeth II inThe Queen (2006) and delicately skewered the Catholic Church for past abuses against women who had children out of wedlock in Philomena (2013).

Without Frears (and writer Nicholas Martin) this story about an admittedly silly, possibly deluded singer who could not sing let along carry a note but was determined to trill and thrill the masses, would never have been told.

And we would have been denied the opportunity of getting to know someone who was at the same time a supporter and decimator of the arts.

It’s a difficult performance to conquer, to effectively portray someone so determined to succeed at a task they had no discernible talent for…but succeed Streep does. She was rewarded for her efforts here with her 20th Academy Award nomination, but this is a subtly affecting turn, with carefully nuanced cues that hint the past tragedy in Florence’s life that forged her future determination.

Florence takes ‘a turn’ after getting excited during a performance and her doctor (John Sessions) examines her. Streep’s faces flashes with embarrassment, Session’s reciprocates with shock as he sees the evidence of prior surgery. Florence admits she had been infected with syphilis during her first marriage, to a man who was an “alley cat”, whose feline fumblings all but destroyed her body. It’s a brief but delicately impressive moment…she is quietened as her physical detractions are politely laid bare.

(In real-life, syphilis may have affected Florence neurologically. This might explain why, when she sang, she heard only beauty when her audience aural failures).

It also explains why Florence insisted on separate bedroom arrangements with her second husband, played expertly here by Grant.

Grant has shown an impressive increase in versatility and range over the past few years, eclipsing the annoying, floppy-haired, foppish, “fuck fuckery” of the dull yuppie roles that ear-marked his star years in the mid-late 1990’s.

This role and his supporting panto villainy in Paddington 2 (2017) and a delectable spin on the closeted homosexual MP Jeremy Thorpe on TV in A Very English Scandal (2018), Grant is fast becoming the go-to Brit actor of a certain age producers want for casual, smart, neatly essayed performances of upper-middle class perversity and pomp.

He also shows here what a bonkers, brilliant dancer he is. Consciously busting some moves (if not a few vertebrae) at a party scene, he has the energy and savoir faire of a man half his age. 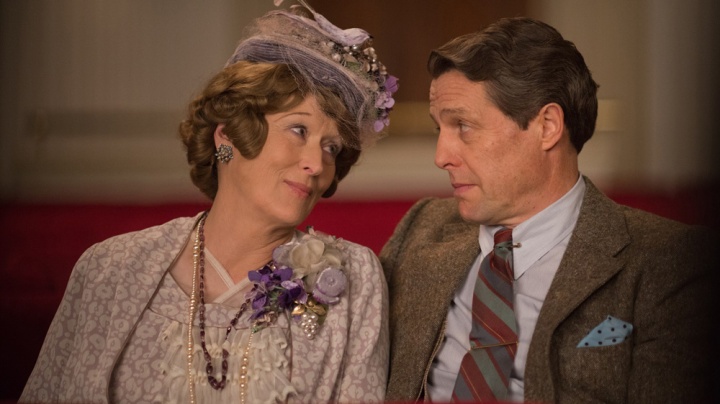 Streep has proven ability as a singer, from Postcards From the Edge (1991) as a thinly veiled Carrie Fisher, through the Abba-tracks strewn nonsense in the Mama Mia movies to the recent Stephen Sondheim musical based blockbuster Into the Woods (2014).

But again she shows her range as a good singer passing herself off as one of the poorest. Her calculated squawks, howls and warped warbling make her Florence sound like the most endearing of chimpanzees…one that is wasted on laughing gas.

A trio of winning performances are rounded off by Simon Helberg (TV’s Big Bang Theory) as McMoon, Florence’s real-life pianist but also her inspiration, who ended his career taking an “interest” in bodybuilding and “judging” muscle competitions.

It’s not a film about bad singing, but about great ambition. The ambition to fill people’s hearts and souls with song. Forget the ‘failure’ of how good that song was from this woman, because this is cinematic positivism at it’s very best.