Film review by Jason Day of Hitchcock (2012), the drama about the making of the horror movie Psycho (1960), directed by Alfred Hitchcock. Starring Anthony Hopkins and Helen Mirren.

Renowned and respected by all in Hollywood, film director Alfred Hitchcock (Anthony Hopkins) feels too comfortable in himself after a sudden dip in adoration from his critics. He feels he is too ‘safe’.

So he starts looking for his next big film and what he needs is something nasty, dirty and shocking. Despite the consternation of his loyal wife Alma (Helen Mirren) and most of Tinseltown, he finds it in the pulp horror novel Psycho. With little support from Hollywood big-wigs, he remortgages his house to fund the film and assembles cast and technicians, despite everyone predicting this folly will be his downfall. 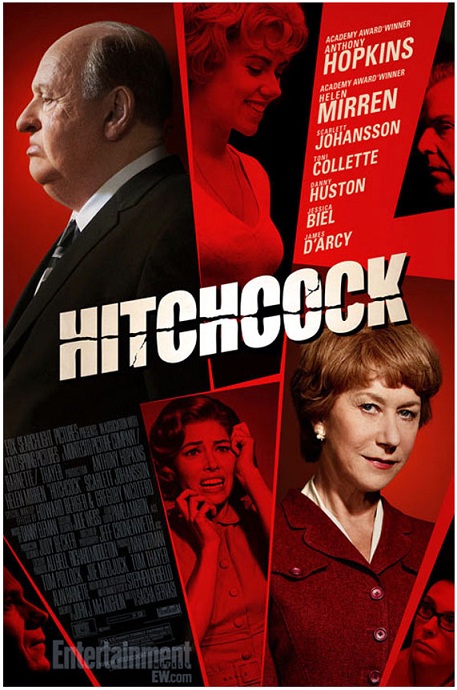 Here’s a quirky cinematic treat. Greatly polished but not greatly accomplished, the enjoyment lies more in the neat approach taken in presenting the back story of how one of the most well-known movies came to be made.

Alfred Hitchcock always maintained – possibly with his tongue in a portly cheek – that Psycho, largely credited by everyone else as inventing the modern horror film, was nothing more than a comedy.

This could have been part of his own marketing spiel to whip up interest in a film that was clearly not a laugh fest (incest, murder and necrophilia not usually producing a high titter tally with movie audiences). But with this reference at the fore front of their minds, writer McLaughlin and director Gervasi have created a fruity comic drama about the genesis and production of Psycho.

As viewers we are made fully aware of this point in a neat preamble with serial killer and Psycho inspiration Ed Gein (Michael Wincott) casually bumping his brother off on their Wisconsin farm coolly observed by Hitch, who sips a cup of tea whilst commenting on the action.

These absurd comic moments punctuate the film at regular intervals and help develop a seam of psychotic darkness that increases as the action proceeds.  Hitch has regular conversations with Gein about how to embellish or improve his film based on Gein’s life and crimes and also for psychoanalytical chit chats about the director’s own black fantasies. Hitch as patient is more vague than Hitch as autocrat on set, declaring he has only been having “impulses…strong ones”. If only ‘Tippi’ Hedren was a fly on the wall.

Thankfully, the comedy is allowed to come to rescue such dark moments thanks to the arch, naughty performances. Hopkins underwent the make-up department’s full prosthetic demands and certainly looks the part, allowing his physical tics and playfully mordant performance to light up the screen (at the end, he ‘conducts’ his premiere audiences’ screams in time with Bernard Hermann’s screeching violins score).

Unaccountably though he misses a cockney trick with the vocal interpretation, sounding far too much like the clipped, Welsh intonation that is Sir Anthony. But this is still a fun role and the pathologically funny lines are brought to the fore by him. Compare this performance with Toby Jones in another Hitch bio, The Girl, in which his accent was spookily recognisable as The Master.

Is there too much comedy in this film? Yes it is leavened by those ghoulish moments mentioned above, but was the old fella really as genial and cinematically pure as this movie makes out?

Tiny insights into his motivations punctuate the piece. He lays out a glut of actresses glamour shots and surveys them for his Psycho lead. None are suitable. They all look the same, they have the same pose, hair and makeup. Some of them are previous stars such as Kim Novak and Grace Kelly.

Kelly is mentioned throughout because she was the ideal, the yardstick. She was the one Hitch formed into a star, remote and luscious…and the one that got away. She is now, as his wife pointedly reminds him, permanently untouchable as Princess Grace of Monaco.

Hitch only has himself and his attentions to blame for that and for the ‘failure’ of her successor, the smart and sassy Vera Miles (Jennifer Biels) who, after suffering those attentions on the set of The Wrong Man (1956), threw him off for domestic bliss with none other than the then incumbent Tarzan (Gordon Scott). That decision rankled so much with Hitch, he gave the lead role of Vertigo (1058) to Kim Novak when Miles announced she was pregnant.

Mirren scores strongly as his forthright and talented wife Alma, although even the most ardent of Reville’s admirers (she is credited as being the galvanising force and sculptress of his career) would be pushed to agree she was ever this buxom and flirtatious.

One would never have believed Janet Leigh was quite the professional actress Johansson portrays her as, but this is a timely reminder of how very good an actress she was in Psycho. Biel has a knowing glint in her eye in a small but telling role as a strong-willed and sarcastic Vera Miles, the Psycho co-star and former Hitch favourite whom he very nearly made into a world-wide star but whose resistance to his over-bearing and controlling style of direction almost ruined her career.

British actor D’Arcy clearly wasn’t in need of anything even approaching a latex make-over as Anthony Perkins sharing, as he does, an uncanny likeness to the American star and also nails the twitchy, nervous, lost boy demeanour that secured Perkins the part that launched him.

A lot of the detail in the film will be fascinating to the uninformed, but a lot about the behind the scenes making of Psycho will already be known to movie buffs, as Stephen Rebello’s book on which the screenplay is based was originally published in 1990. Just to show how much of a movie geek I am, the necessity of Vera Miles’ immobile, concrete wig is explained away here as covering up her brunette hair (in defiance of Hitch, she changed her hair colour). The real reason is because Miles had shaved her head for her most recent role in Five Branded Women. Perhaps Miss Biel, who gave an interview about how terrifying it was to portray a real-life movie star, was too spooked herself at this suggestion?