Film review, by Claire Durrant, of the Tommy Wiseau directed comedy thriller about a man who, after losing everything, gets a second chance by a friendly mortician.

Drifter Jon (Greg Sestero) has lost everything. Luckily for him mortician Harvey (Tommy Wiseau) has taken a liking to him and offers him a job. When Jon realises that they can get in on the underground gold business by selling gold teeth, greed, paranoia and jealousy between them ensues. When will they learn to put their friendship before money? Are they friends or fiends?

Philosopher Bernard Williams once stated that “talent is a flame, genius is a fire.” If that truly is the case then Tommy Wiseau is a volcano. A dormant volcano perhaps.

For those who do not immediately smile when the name Tommy Wiseau is said, I can only imagine that you have yet to immerse yourself in his ‘masterpiece’ The Room (2003). Dubbed  “the Citizen Kane of bad movies”, the film is a pseudo thriller/melodramatic love triangle between Wiseau’s Johnny, Lisa (Juliette Danielle) and Mark (Sestero).

Sestero in fact wrote about his experiences filming The Room, as well as his budding friendship with Wiseau in the book The Disaster Artist. A film adaptation is due to be released at the end of this year, and there is actually some Oscar buzz surrounding it. Naturally I am excited to see James Franco transform in to Tommy Wiseau. (Wiseau wanted Johnny Depp to play him…apparently they couldn’t afford Mr. Depp).

To this day, The Room is still a sells out at cinemas worldwide. Fans come together to heckle phrases and throw plastic spoons at the screen (for the uninitiated, you will understand when you see it). 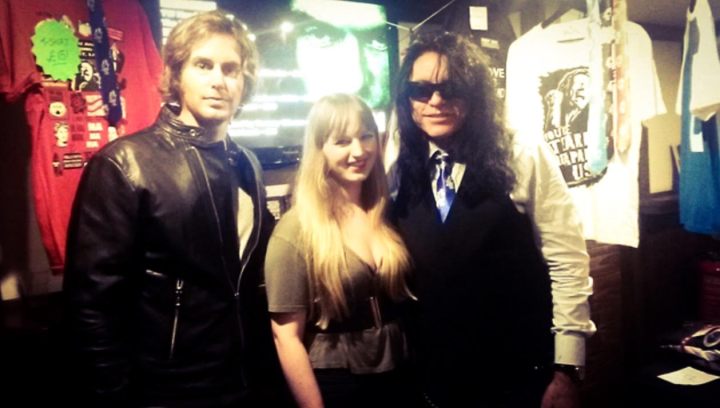 Our Claire Durrant with Greg Sestero and Tommy Wiseau, stars of The Room and Best F(r)iends.

The film has rightfully earned its place in the history of midnight cinema, as well as being a monumental bizarre cult hit, akin to Plan 9 from Outer Space (1959), and The Rocky Horror Picture Show (1975).

His pièce de résistance might not have been turned out the way Wiseau wanted, but it has undoubtedly made a name out of both him and Sestero. Behind the scene book and a film illustrate how infamous the film is and may be for some time to come.

Now some fourteen years later, Sestero and Wiseau are back with their second collaboration. As I queued outside The Prince Charles Cinema for the premiere, I was surrounded by fellow eager fans, all wondering if Best F(r)iends could match the ingenious beauty of their previous film. As it turns out, Best F(r)iends is better, but maybe not for the reasons people want.

Firstly, don’t bother to watch the trailer. Little to nothing actually made it in to the feature!

Secondly, there is an immense improvement on the production values. The cinematography is genuinely gorgeous, and the exposition shots actually serve a purpose to the narrative.

Speaking of which, the narrative is fluid, and the story can actually be followed. Sestero, who wrote the screenplay, has a talent for writing. There are even little tidbits in the film that hark back to their previous work. He gives the fans of The Room what they want!

Tommy Wiseau is still his eccentric self. Seeing the enigma both on screen and in person is always a joy. Meeting both him and Greg Sestero was also an absolute pleasure.

Unlike The Room which became an accidental comedy (although Wiseau will remark that he always intended it to be a dark comedy) Best F(r)iends has identified itself as a comedic film, therefore Wiseau has a lot more fun with his performing. And so do we. And so does Sestero.

In fact the best thing about Best F(r)iends is, ironically, the undeniable and genuine friendship between our two leading actors. Their chemistry should be envied. The Hitman’s Bodyguard (2017) had two A list actors; Samuel L. Jackson and Ryan Reynolds, and their chemistry felt weaker in comparison.

So whilst Best F(r)iends probably won’t reach the phenomenon of The Room, it still shows a vast improvement in Wiseau and Sestero’s filmmaking and performing skills. I can’t say it’s a film that most people will enjoy, but fans of The Room will know exactly what they are getting themselves in for, and will definitely enjoy seeing Wiseau and Sestero in a different light. Double features in the future are a must!

Maybe Tommy Wiseau is an erupting volcano after all.